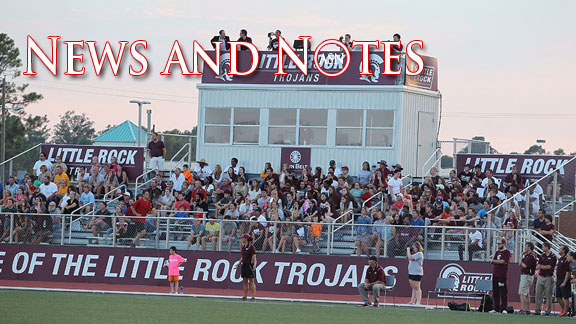 Zar will be the Trojans’ goalkeeper coach this fall and also help the staff with video editing.

“Htut brings with him great knowledge of the game having played for his national team and has earned a variety of high-level coaching licenses,” Blewitt said. “His personality and passion for the game is infectious. He’s a superb addition to our staff.”

Zar joins the Trojans after spending the last year as the assistant men’s soccer coach and head men’s tennis coach at the University of Minnesota Morris. While working with the Cougars, Zar put an emphasis on goalkeeper training and put together an interactive team-building program. He also established the program’s first summer youth camp and oversaw academic progress for his student-athletes.

∗ More than 2,000 Sun Belt Conference student-athletes were named to the 2015-16 Commissioner’s List and Academic Honor Roll as announced by the league office Tuesday afternoon with A-State accounting for 170 of the honorees.

Recently, the A-State men’s cross country, football, and volleyball teams were recognized by the Sun Belt Conference for winning Team GPA Awards.  The athletics department saw over 50 student-athletes graduate during the 2015-16 academic year.

The Red Wolves have seen their academic performance reach an all-time high during the last three years including a 3.070 all-department GPA in the fall of 2015, a semester which also saw a school-record 213 student-athletes named to the Athletics Director’s Honor Roll. The athletics department also posted its best ever department-wide APR (Academic Progress Rates) score each of the last two years, according to the latest data.

A-State’s women’s bowling, women’s golf, women’s tennis, and men’s cross country claimed Public Recognition Awards from the NCAA during the past year for earning multi-year APR in the top 10 percent of all teams in each sport.