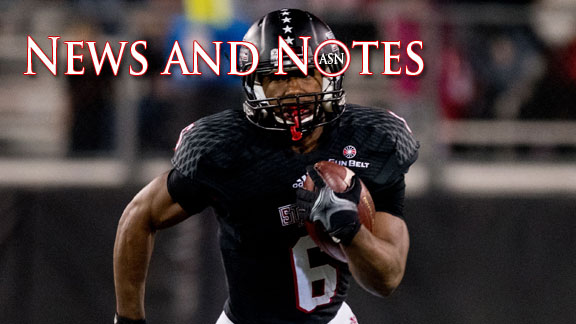 The fans are invited to Centennial Bank Stadium as the Red Wolves hold their 14th practice of fall camp at 6 p.m., which will include a full-contact scrimmage.  Posters and schedule cards will be available on the concourse of the stadium.

Howl, Scarlet, The Sound of the Natural State and the A-State spirit squads will all be at the practice as well, and the Arkansas State cheer and dance teams will debut new routines. Pending weather, seats will be tagged in the stadium that are available as 2016 season tickets.  Fans can come out beginning at 4 p.m. to take a look at available seats and purchase on site.

Only full-time enrolled students at UALR are eligible for tryouts. Students must fill out the attached waiver form and return it, along with a signed physical form (no more than a year old) from a medical doctor, to the baseball coaching staff. Proof of health insurance will also be required to tryout.

∗ The field for the 17th annual Rachel Stewart Memorial Golf Tournament is complete with 81 teams, made up of approximately 240 players, scheduled to participate in the two-day tourney this Saturday and Sunday, Aug. 20-21, at Sage Meadows Country Club in Jonesboro.

The event is held each year in honor of the late Stewart, who was a four-year letter winner at Arkansas State from 1994-97.  She earned All-Sun Belt Conference honors all four years of her career and was named to the Sun Belt Conference 30-Year All-Time Team that was announced in 2006.

“We are very excited for the Rachel Stewart tournament this coming weekend,” said A-State head women’s golf coach M.J. Desbiens Shaw.  “We have a full field with a shotgun start at 8:00 a.m. Saturday and 1:00 p.m. Sunday at Sage Meadows Country Club.  We appreciate all the support from the community and the volunteers for their hard work to make this tournament a huge success.”

The tournament is a three-person scramble with the proceeds benefiting the Rachel Stewart Memorial Foundation, the A-State men’s and women’s golf programs, and the promotion of golf in the Northeast Arkansas area.

“We’re looking forward to this year’s Rachel Stewart Memorial Tournament” said A-State head men’s golf coach Mike Hagen.  “This is a first-class event that our community has embraced, and we appreciate the outstanding support from everyone involved, including our sponsors and Sage Meadows, to help make it possible.”