No. 16 Harding forces six turnovers in defeating No. 5 Henderson State 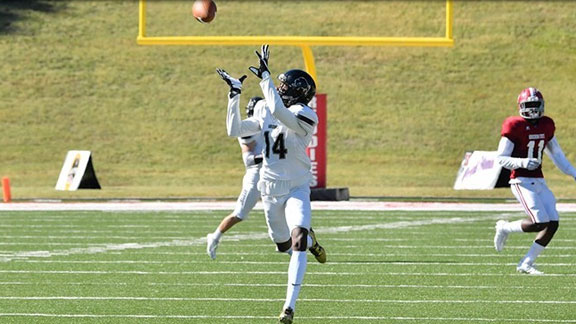 ARKADELPHIA – Harding’s No. 1-ranked defense forced six Henderson State turnovers that led to four touchdowns, and the 16th-ranked Bisons defeated the No. 5 Reddies 35-3 on Saturday in Great American Conference action at Carpenter-Haygood Stadium.

Henderson State also turned the ball over on downs three times. Harding did not have a turnover for the second straight week and has only one in the last three games.

Henderson State committed five turnovers in the first half, and Harding capitalized with four touchdowns to lead 35-0 at the break.

Harding senior Park Parish scored on a 1-yard touchdown with 3:36 left in the first quarter that followed a Henderson State fumbled punt at their own 12-yard line.

Harding’s only extended scoring drive of the half came on its first drive of the second quarter, and it also came after a turnover. Senior cornerback Corey Bassett intercepted a pass in the end zone, and Harding drove 80 yards on 11 plays with senior fullback Michael Latu scoring from 2 yards out.

The Bisons took a 21-0 lead at the 7:23 mark of the second quarter. Senior defensive end Arthur Akers took the ball away from Henderson State quarterback Andrew Black and raced 17 yards for a touchdown.

Harding’s only touchdown that did not come from a turnover came late in the first half. With less than 20 seconds remaining Parish found a wide-open Bobby Green on the Bison sideline for a 51-yard scoring strike.

Henderson State had time for one last play before halftime, and it resulted in Harding’s final touchdown. Black was under heavy pressure from two Bison defenders and threw to his left. Senior defensive back Scott Middleton intercepted the pass, cut across the field, beat one Reddie player and scored on a 27-yard return.

The only points of the second half came on a 31-yard field goal by Henderson State’s Houston Ray with 9:39 left in the third quarter.

The Bisons limited the Reddies to only 73 rushing yards and 235 passing yards on 45 pass attempts.

Harding returns to First Security Stadium next Saturday at 6 p.m. to take on Southeastern Oklahoma.