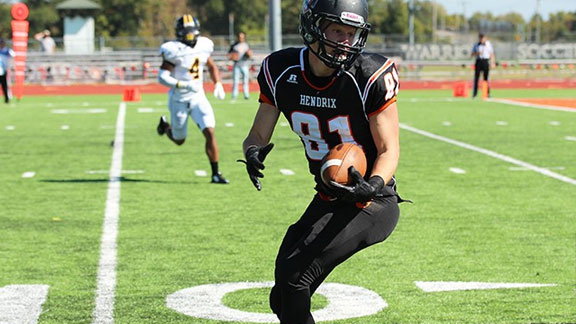 Hendrix opened the game with 17 points in the first quarter. Senior Steve Crenshaw booted a 24-yard field goal on their first drive. Senior quarterback Seth Peters connected with junior Nate Hodapp for a 65-yard touchdown. Senior tailback Dayton Winn punched another score in from the one to give the Orange & Black a 17-0 lead.

BSC opened the second quarter with a 34-yard field goal from Ryder Andrews. Winn scored an 48-yard run and Crenshaw hit a 28-yard field goal to give Hendrix a 27-3 advantage at halftime.

The Panthers scored at the 6:34 mark in the third when Kerrigan Pennington threw a three-yard pass to Jonathan Scaringe. The Warriors answered with a Peters one-yard scramble to make the game 34-10 headed into the final period.

In the fourth, junior running back Mason Millsaps ran for a 13-yard TD. After another Panther scored, Hendrix added the final nail with a 24-yard pass from freshman Miles Thompson to freshman Dustin McNeely.

Hendrix Notes
– Winn finished with 10 carries for 126 yards and two touchdowns.
– Millsaps added seven carries for 56 yards and a score.
– Peters went 20-of-32 passing for 396 yards and a TD, along with one touchdown rushing.
– Thompson finished 4-of-6 for 70 yards and a touchdown.
– Hodapp tallied six catches for a career-high 152 yards and a score.
– Junior safety Michael Kramer led the Warrior defense with eight tackles.
– Junior linebacker Jake Brantely adds six tackles, including a sack.
– Senior defensive end Harrison Newton had five tackles, including one for a loss.
– Senior defensive end Gray Stanton also had five tackles and two pass breakups.
– Freshman Aric Sislo recorded a sack.
– Freshman twin brothers Cory and Chad McGonigal each had an interception. Cory ran his back 25 yards.

Birmingham-Southern Notes
– Pennington threw for 118 yards and two touchdowns on 10-18 with one interception.
– Samir Usman ran 16 times for 84 yards.
– Scaringe had five catches for 63 yards and a touchdown.
– Matthew Byers led the Panthers with nine solo tackles.

Up Next
Hendrix will return home for a conference game against Berry College next Saturday.