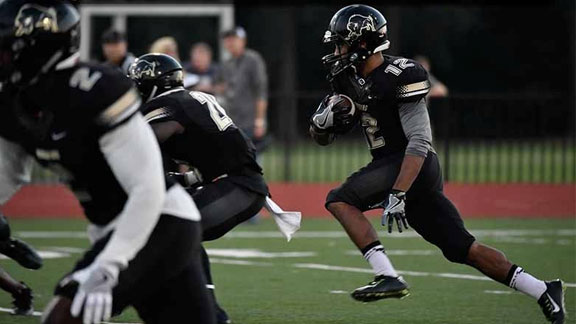 SEARCY – The second quarter was kind to the No. 8 Harding football team for the second straight week, as the Bisons scored 35 points in the period and defeated Southeastern Oklahoma 63-17 on Saturday in Great American Conference action at First Security Stadium.

Harding scored 28 points in the second quarter of its 35-3 win over Henderson State last week in Arkadelphia.

With the victory over Southeastern, Harding improved to 7-0 overall and in conference for the first time in program history. Southeastern (4-3) lost to Harding for the sixth consecutive time and seventh straight in Searcy.

The Savage Storm gained 204 of its 377 total yards in the first quarter and led the Bisons 17-14. Everything changed in the second quarter-Harding scored five times before halftime, and Southeastern never scored again.

On the first play after the quarter break, Harding quarterback Park Parish hit Andrew Dather in the corner of the end zone for a 16-yard touchdown. Dather made a juggling catch to give Harding a 21-17 lead.

Following a touchback on a Southeastern punt, Harding scored again on a three-play drive that ended in a 74-yard touchdown run on a reverse to slot back Grant Kimberlin. Harding led 28-17 with 11:24 left in the half.

Harding forced a three-and-out and took over at the 50-yard line. Two plays later, Harding fullback Michael Latu scored on a 42-yard run to put the Bisons up 35-17.

Hampton returned his interception to the Southeastern 13. A 9-yard run by Latu on the second play of the drive gave Harding a 42-17 lead with 52 seconds left in the half.

Southeastern did not pick up a first down on its next drive and was forced to punt. Harding senior Corey Bassett caught the punt at the Harding 31 and returned it 69 yards for a touchdown as time ran out in the half. Harding led 49-17.

Bassett, who also had a 56-yard kickoff return in the game, became only the second Harding player, and the first since Harry Lisle in 1966, to return a kickoff and a punt for a touchdown in the same season. He had a 100-yard kickoff return earlier in the season against Southern Nazarene.

Harding’s defense continued its outstanding play in the second half, holding Southeastern to only 41 total yards. The Storm’s longest drive after halftime was 16 yards and resulted in a punt.

Senior defensive end Trevon Biglow recorded his third sack of the season during the second half. He joined Josh Aldridge (2009-12) as only the second Harding player in the NCAA era to record 20 career sacks.

Harding tacked on two touchdowns in the second half. Parish scored his second of the game and school-record 36th of his career on a 16-yard run in the third quarter. Freshman Romar Reades added a 4-yard touchdown with 8:44 left to complete the scoring.

Latu led Harding in rushing with 96 yards on 13 carries and scored three touchdowns for the third time in his career. Parish rushed 10 times for 85 yards and two touchdowns and completed two passes for 61 yards and another touchdown.

Southeastern’s Ronnie Green became the first player with more than 100 rushing yards against Harding this season. He carried 17 times for 116 yards and a touchdown.

CB Cantwell, the Storm’s starting quarterback, completed 16-of-28 for 174 yards with two interceptions and one touchdown, a 44-yard scoring pass to Anterric Maxey in the first quarter.

Southeastern had 132 rushing yards in the first quarter but only 70 for the rest of the game. Harding rushed for 431 yards and seven touchdowns and had 492 total yards.