No. 8 Scots find balance in win over MBU 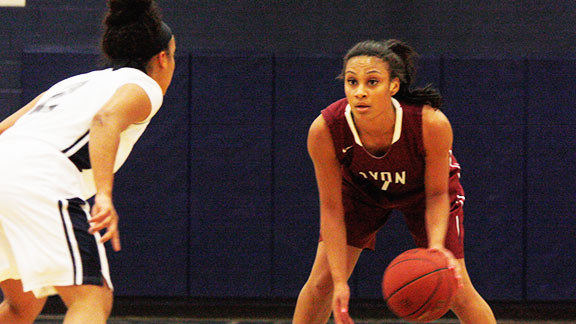 ST. LOUIS, Mo.– The eighth-ranked Lyon College women’s basketball team had three players score in double-figures to help lead them to a 68-53 win over Missouri Baptist University Thursday night. It was the seventh-straight victory for Lyon, and fifth on the road this year.

Lyon improves to 8-1 overall and 5-0 in the American Midwest Conference for the season, while Missouri Baptist falls to 2-6 overall and 1-3 in conference play. The Scots hold onto first place, while No. 1 Freed-Hardeman University is in second place in the AMC with a 10-0 overall record and 4-0 mark in conference play.

Missouri Baptist sits in a three-way tie for seventh place, while Harris-Stowe State and Park. No. 23 Lindenwood University-Belleville and William Woods University sit in third place with a 4-1 mark in the AMC, while No. 13 Columbia is in fourth with a 4-2 conference record.

46 – The Scots grabbed 46 total rebounds in the game. While Moore and Elkins led the way, Ratliff grabbed six boards. Henderson and Ali Tucker had four rebounds, while Samantha French had three.

8 – Lyon had eight total steals in the game, led by five from Moore. Ratliff, Madison Riley and Kelsey Smith each had one.

After outscoring Missouri Baptist 15-9 in the first quarter, the Scots posted 19 more points in the second period to take a 34-23 halftime lead.

Kaci Hall and Moore opened up the scoring in the second half for the Scots – combining for five points, as the Scots would extend their lead to 49-33 with 2:16 left in the third later on. Henderson and French each made two free throws toward the end of the third, giving Lyon a 56-36 advantage heading into the fourth quarter.

The Spartans tried to bounce back opening the fourth on a 9-4 run, but the Scots were able to sprint past MBU down the stretch. Riley, Henderson and Ratliff scored the team’s final six points in the final four minutes to clinch the victory.