No. 9 Lyon coasts past Hannibal-LaGrange 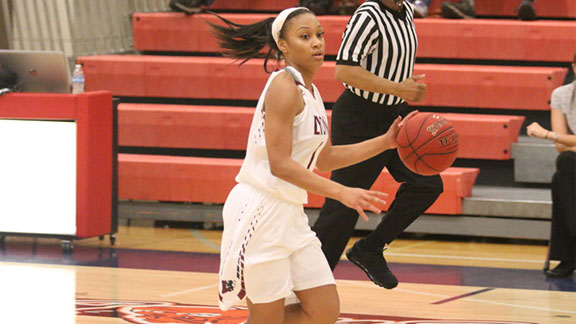 BATESVILLE – The ninth-ranked Lyon College women’s basketball team posted a season high 101 points Thursday night, as the team defeated Hannibal-LaGrange University 101-44 inside James C. Becknell Gymnasium. Thursday night marked the highest point total by the team since Dec. 19, 2015 when the Scots scored 104 points against St. Louis College of Pharmacy, in a 104-37 win against the Eutectics at home.

Lyon had four players score in double-figures while having another terrific night from the field, recording a 56.3 percentage. Madison Riley led the Scots with 17 points, while grabbing six rebounds. Kiara Moore had 16 points seven assists and six steals, while Liz Henderson and Sarah Elkins chipped in 13 points and 10 points, respectively.

Lyon improves to 12-2 overall and 8-1 in the American Midwest Conference. Hannibal-LaGrange falls to 2-13 on the season and 2-8 in conference play. The Scots hold onto second place in the AMC with the victory. No. 1 Freed-Hardeman University defeated No. 12 Columbia College 67-44 Thursday night to stay atop the conference, while No. 24 Lindenwood University-Belleville and William Woods University also each picked up victories to remain in a tie for third place. The loss for the Cougars dropped them into sole possession of fourth place in the AMC.

40 – The hot shooting percentage for Lyon on the night, was in large part to 40 made field goals for the team. Overall, the Scots shot 40-of-71 from the floor led by seven total field goals by Riley. Moore, Henderson and Elkins each had five made field goals, while Hailey Hastings went 4-for-5 scoring nine points in the game.

28 – The Scots had another group of players contribute on the scoring end, as Hastings (9), Tressa Linson (7), Samantha French (6) and Ali Tucker combined for 28 points.

18 – Lyon out-rebounded Hannibal-LaGrange 41-23 on the night. Elliot Taylor had a team high nine rebounds as Riley was second with six. Moore and Hastings also chipped in four apiece and French and Allison Tackett had three rebounds each.

33 – Lyon took advantage of the Trojans’ mistakes, recording 33 points off their 21 turnovers.  The Scots turned the ball over just six times the entire night.

Lyon got off to a fast start going on a 19-9 run to begin the game. HLG whittled the deficit down some toward the end of the quarter, as Lyon led 20-11 with 4:33 left in the period. The Scots then scored 10 more points in the quarter – capped off by two free throws from Ratliff to take a 30-18 lead at the end of the period.

The Scots would continue to keep their foot on the gas pedal throughout the rest of the game. Lyon held the Trojans to just five points in the second quarter, to take a 42-23 halftime lead. The Scots would score at least 20 points in the final two quarters, while holding HLG to just 37.0 percent from the floor the entire game, on 17-of-46 shooting.

WHAT’S AHEAD FOR THE SCOTS

Lyon begins a four-game road trip on Jan. 12 as the team travels to Lindenwood-Belleville to face the Lynx in Belleville, Ill., at 5:30 p.m. The Scots will then face Harris-Stowe on Jan. 14 in St. Louis, Mo., at 1 p.m.