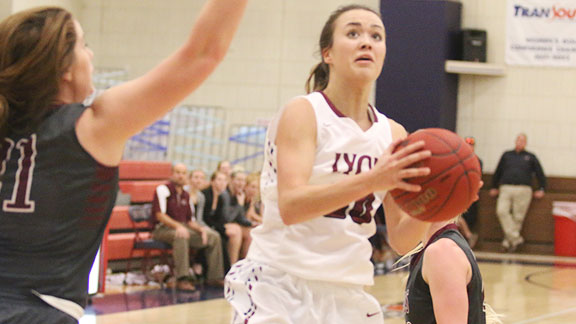 BATESVILLE, Ark. – The ninth-ranked Lyon College women’s basketball team escaped William Woods University Thursday night with a strong fourth quarter effort. With the Owls leading 56-55 after three quarters, the Scots outscored the Owls 23-8 in the final period to come out on top with a 78-64 win.

4 – The Scots outrebounded the Owls by four at 37-33. Jackson and Ratliff each led the team with eight rebounds apiece, while Henderson added five.

7 – Each team had seven steals in the game. Jackson led Lyon with three, while Elkins, Taylor, Riley and Samantha French had one apiece.

Playing with home court advantage, Lyon was given a test from conference foe William Woods throughout the night. With the game tied at 34 at the 2:45 mark of the second quarter, the Owls went on a 6-1 run to take a 41-35 lead with less than a minute left. WWU would take a 41-37 lead at halftime.

Both teams would come out strong in the second half, with Lyon trailing just behind the Owls in the third quarter. Lyon cut the deficit to one point on two different occasions in the period at 53-52 and 56-55, which came with 28 seconds remaining in the period. Then in the fourth quarter after a basket from the Owls, Riley tied the game at 58 after hitting a three-pointer with 7:52 left in the game.

The Scots would grab their first lead since the 2:45 mark in the second quarter after Riley made another three-pointer to give the Scots a 63-62 lead with 4:36 remaining. The stampede of points then began for Lyon as they closed the game on a 15-2 run to take a decisive victory.

WHAT’S AHEAD FOR THE SCOTS
Lyon continues AMC play as they host No. 20 Columbia College on Saturday at 12 p.m.