No. 9 Lyon falls in double-overtime thriller to Ozarks 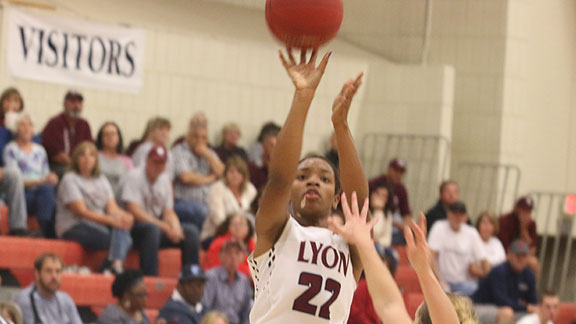 BATESVILLE – The ninth-ranked Lyon College women’s basketball team’s season opener was nothing short of exciting inside James C. Becknell Gymnasium Tuesday night. In a back-and-forth battle with College of the Ozarks, the game went into two overtime periods. The Scots hung tough battling all night with the Bobcats, but came up just short, falling 92-88.

Jamie Jackson and Sarah Elkins each had career-nights with Jackson posting 35 points on 11-of-24 shooting, and Elkins chipping in 14 points on 6-of-10 from the floor.

Lyon falls to 0-1 overall on the season, while College of the Ozarks is now 3-0. Only six teams have played so far in the American Midwest Conference this year, with Harris-Stowe State University and William Woods University in first place at 1-0. Williams Baptist College, Hannibal-LaGrange University, Park University and Stephens College are all 0-1 with the Scots.

23 – Ali Tucker, Madison Riley and Elliot Taylor combined for 23 points for the Scots. Tucker and Riley each had eight, while Taylor added seven.

41 – The Scots had 41 rebounds in the game led by seven apiece from Riley and Taylor. Jackson added five, while Elkins had four. The Bobcats had 40 rebounds, led by 12 from Kelsie Cleeton.

31 – Lyon took advantage of College of the Ozark’s turnovers by scoring 31 points.

Lyon had the advantage early outscoring College of the Ozarks 18-12 in the first quarter, and 21-17 in the second quarter. Lyon would take a 10 point lead into the locker room at 39-29.

At the start of the third quarter, College of the Ozarks made a run cutting into the Scots lead at 43-38. The Scots would extend their lead by going on a 7-1 run to take a 50-39 lead, but the Bobcats climbed back in it trailing 55-50 heading into the fourth.

Lyon and College of the Ozarks were in a dogfight the rest of the way. As Lyon held onto a lead with just under five minutes left, the Bobcats took the lead away going up 63-59 at the 3:53 mark. The Scots would later grab the lead back holding onto a 68-65 advantage, but with six seconds left in the fourth quarter, the Bobcats hit a three-pointer to tie the game up and take it into overtime.

The first overtime period was neck-and-neck. With 2:25 left in the period, Jackson sank a three-pointer to give Lyon a 78-75 lead. After two free throws from Riley the Scots led 80-77, but College of the Ozarks once again tied it as Cassidy Johnson heaved an over the shoulder shot as time expired, making the score 80 all.

The second overtime period would be the final act as both teams were tied at 88 with 1:11 remaining. The Bobcats made a basket to take a 90-88 lead with 31 seconds left before holding off Lyon for the win.

WHAT’S AHEAD FOR THE SCOTS
Lyon will next play on Nov. 11 when they travel to Shreveport, La., to face Lousiana State University-Shreveport. Tipoff is scheduled for 7 p.m.