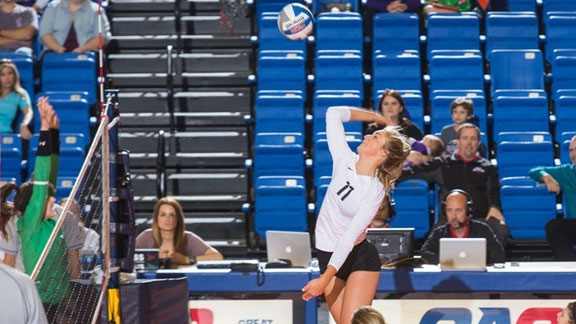 FIRST SET HIGHLIGHTS:
Standford, Shay Mitchell and Maggie Pyles each totaled four kills as the Blossoms took the opening set, 26-24. UAM took a 13-8 lead only to see Ouachita rally off six straight points. From that point on, neither team held a lead greater than three points. Stanford hit .800 and scored 5.5 points. Kendall Vondra dished out 14 assists and Macy Mitchell tallied 14 digs in a      set that included six ties.

SECOND SET HIGHLIGHTS:
Ouachita evened the contest with a 25-14 decision in the second set. After hitting .146 in the opening set, the Tigers hit .345, led by Caitlin Cantrell, who racked up six kills and hit .750 in the set. The Tiger defense also stepped up, limiting the Blossoms to a .059 attack percentage, after they hit .229 in winning the first set. Standford continued her strong play by picking up six more kills, against only one error, in nine attempts.

THIRD SET HIGHLIGHTS:
For the second time in the contest, the Tigers and Blossoms went beyond the 25-point march as the Tigers won the set, 29-27. The set saw the score tied 10 times. Huckabee has a dominant set as after totaling five kills in the opening two sets, she tallied nine and accounted for 9.5 points. Stormi Leonard handed out 15 assists. On the UAM side, Shay Mitchell, who had hit .182 in the first two sets, hit .429 after registering six kills against only one error.

FOURTH SET HIGHLIGHTS:
The Blossoms ran off the first four points of the set and never allowed the Tigers to take the lead, despite coming back to tie the set twice. The Blossoms put together their best attacking set of the match, hitting .288. Shay Mitchell continued to excel as she collected nine kills without an error on any of her 22 attempts. Vondra registered an assist on 19 of UAM’s 21 kills in the set. She added six digs. For Ouachita, Huckabee recorded her second-straight set with nine kills and hit .600 for the set.

FIFTH SET HIGHLIGHTS:
Ouachita pulled out a 15-13 win in the decisive fifth set, a set that featured six ties and two lead changes. Kori Bullard’s fourth ace of the match gave the Tigers the winning point.

WHAT’S NEXT:
Ouachita will face Southern Nazarene at 3:30 p.m. on Friday.