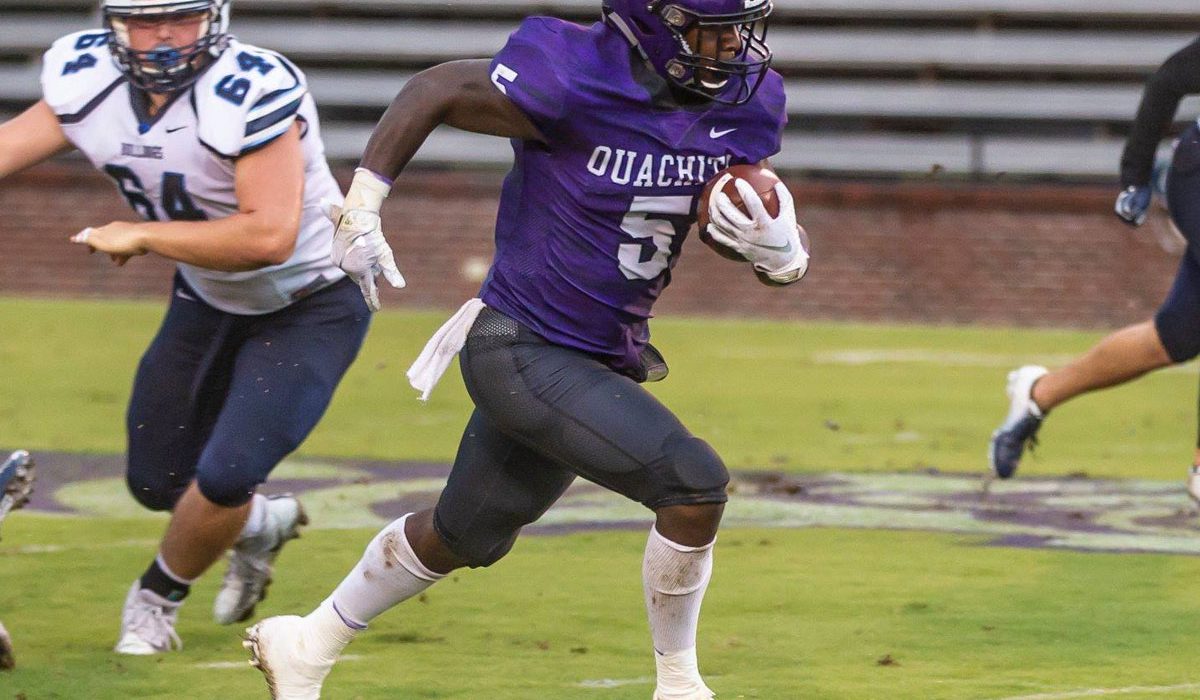 ARKADELPHIA – Ouachita senior running back Kris Oliver (Arkadelphia, Ark.) took a handoff with six minutes remaining in the third quarter and scampered for a five yard gain, the short run gave the Arkadelphia native the All-Time career rushing record in the Great American Conference as Ouachita costed to a 41-0 victory over Southern Nazarene.

Oliver carried the ball 28 times for a season high 151 yards. The senior also added a pair of touchdowns on the night, pushing his season total to eight. Oliver also holds the GAC record for 100-yard rushing games with 16 in his career. This is the second consecutive week No. 4 Ouachita  (8-0) has had a running back cross the 150 yard rushing threshold.

The Tigers offense dominated every aspect of the game against Southern Nazarene (1-7). Ouachita collected 27 first downs in the game and held the Crimson Storm to just six in the contest. For just the second time this season the Ouachita offense out gained their opponent in both the rushing and passing game. The Tigers rushed for 271 yards and scored four touchdowns as a team, through the air Ouachita passed for 170 yards and a score.

Redshirt freshman quarterback Brayden Brazeal (England, Ark.) showed his dual threat ability on Thursday night. The Natural State native passed for 133 yards and a score and added 59 yards rushing on the ground. Backup quarterback Caleb Sallisbury (Van Buren, Ark.) came in during the fourth quarter and ran for a pair of touchdowns in the period.

Senior wide receiver La’Darius McElroy took advantage of his matchup on the field recording three receptions for 47 yards and a touchdown. Slot receiver Allie Freeman (Little Rock, Ark.) added to his team leading reception total with three catches on the night for 27 yards.

The Ouachita defense flexed their muscles on Southern Nazarene as they finished off their second shutout of the season. This is the first season since the turn of the century that the Tigers have recorded two shutouts in the same season. The Tigers defense has held opponents to under 10 points on five different occasions this year.

Interceptions have been the calling card for the Ouachita defense this season. Coming into the game on Thursday night the Tigers had recorded 14 interceptions and 32 pass breakups. The Tigers had their opportunities to add to the total but saw both passes fall off the fingertips of Ouachita defenders. The Tigers made up for it with hard-hitting plays late in the fourth quarter as the defense forced a pair of fumbles to close out the game.

First Quarter: Ouachita 7, Southern Nazarene 0
After a pair of three-and-outs by each team’s offense, Ouachita took over on their own 23-yardline with 10:59 remaining in the opening quarter. On the second play of the drive, Brazeal scampered ahead for a 12-yard rush, putting the ball at the Tiger 40-yard line. Two plays later, the Tigers avoided disaster by jumping on a fumbled handoff.

Facing a third-and-14 Ouachita appeared that they would be forced to punt the ball for a second consecutive drive. Brazeal was flushed out of the pocket and raced ahead for a 40-yard gain and a first down inside the Southern Nazarene 24-yardline. Two plays later Brockton Brown (Sheridan, Ark.) 17-yards inside the Crimson Storm 10-yardline. Oliver ran the ball in from nine-yards out to give the Tigers their first score of the night.

Second Quarter: Ouachita 14, Southern Nazarene 0
Oliver opened up the Tigers first drive of the second quarter with a 10-yard run to the Ouachita 24-yardline. Five plays later Brazeal connected with Freeman for a 29-yard gain on a third down to keep the drive alive. Facing their second third down of the drive, Brazeal found McElroy in the endzone for the Tigers second score of the night.

After the score, neither team was able to get into a rhythm offensively as the Tigers went into the halftime break up 14-0.

Third Quarter: Ouachita 20, Southern Nazarene 0
The Ouachita defense forced a quick three-and-out and the offense began on their own 25-yard line with 13:09 remaining in the quarter. A steady dose of Oliver proved to be lethal for the Crimson Storm offense as the Arkadelphia native touched the ball seven times during the drive. Ouachita moved the ball all the way down to the Southern Nazarene 22-yardline. The Tigers were forced to try a field goal after an incomplete pass on third down. Senior kicker Cole Antley (Atlanta, Ga.) nailed the 39-yard field goal with 8:35 remaining in the quarter.

On the Tigers, second drive of the quarter they used the same formula as the first. A steady diet of Oliver proved to be productive as the senior broke the GAC career rushing record during the drive. Once again Ouachita held the ball inside the Crimson Storm 10-yardline but had to settle for an Antley field goal.

Fourth Quarter: Ouachita 41, Southern Nazarene 0
On the first drive of the fourth quarter, Oliver proved that he would not be denied the endzone. The senior running back touched the ball five times on seven plays and pushed the Tigers lead to 27 points with 11 minutes remaining in the game.

On the second play of the Southern Nazarene drive, senior linebacker Parker Witt (Dardenelle, Ark.) completely manhandled Gage Porter for a seven-yard loss. Two plays later and the Tigers forced the Crimson Storm to punt once again. The punt by Crimson Storm punter Ryan Reid only traveled 24-yards as the Tigers setup with great field position.

The Tigers only needed four plays to score another fourth quarter touchdown. Sallisbury found Hayden Waller (Weatherford, Texas) for a 33-yard completion to set up the Tigers with a first-and-goal from the one-yard line. Sallisbury ran the ball in on the next play to give the Tigers a commanding 34-0 advantage.

Before Tiger fans could even take a seat the special teams came through with one of the biggest plays of the night. Caleb Porchia (Texarkana, Texas) lit up Brandon Perez on the return and CJ Heckard (Wisner, La.) fell on the loose ball. Two plays later and Sallisbury had found the back of the endzone for a second time in two minutes.

Southern Nazarene took over with 5:20 remaining in the game and put together their best drive of the game. The Crimson Storm had multiple first downs during the drive. On the ninth play of the freshman defensive lineman Hunter Swoboda (Bentonville, Ark.) forced the ball loose and Justin Dean (Mena, Ark.) fell on the loose ball for the Tigers.

Ouachita finished the game in victory formation as they collected their eighth consecutive win of the season. The Tiger football team will be back on the road next Saturday against the University of Arkansas at Monticello. For all the latest news on Ouachita football head over to obutigers.com.