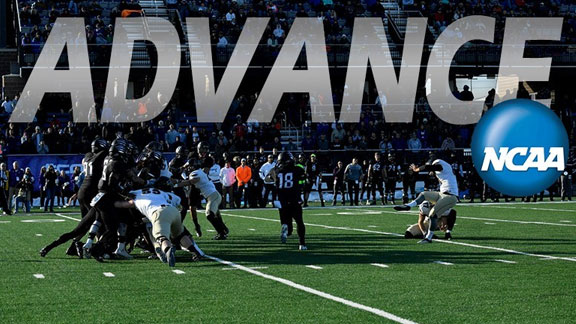 SIOUX FALLS, S.D. – Harding junior Tristan Parsley kicked a 47-yard game-tying field goal with six seconds left in regulation and booted a 35-yard game winner in overtime to lift the fifth-ranked Bisons over the No. 4-ranked Sioux Falls Cougars on Saturday in the second round of the NCAA Division II Playoffs.

Harding improved to 13-0 and will take on Division II’s top-ranked team, Northwest Missouri State, next Saturday in Maryville, Missouri, in the national quarterfinals. Sioux Falls, who was also playing in the second round of the Division II Playoffs for the first time, ended its season 12-1. Northwest Missouri defeated No. 9 Emporia State 44-13 to advance to the quarterfinals.

Sioux Falls had the ball first in overtime, but Harding senior linebacker Benjamin Shields intercepted a pass from Cougar quarterback Luke Papilion on the third play of the drive.

Harding took over and moved the ball 7 yards on three plays and turned the game over to Parsley, who drilled the 35-yarder down the middle, setting off tremendous Bison celebration at midfield.

Harding pulled within 24-21 with a 13-play, 75-yard drive that took almost six minutes. The Bisons converted a 4th-and-3 at their own 32 with a 17-yard run by Zach Shelley. Backup quarterback Terrence Dingle also completed a 22-yard pass to Andrew Dather to get Harding down to the USF 20. Senior starting quarterback Park Parish came back into the game and scored on a 1-yard run.

Sioux Falls took possession with just over four minutes remaining and tried to run out the clock. The Bisons held the Cougars to only one first down and forced a punt, taking over at their own 13-yard line with no timeouts and only 57 seconds left on the clock.

Parish completed a 14-yard pass to Dather on the first play. After a 14-yard pass interference penalty, Parish rushed for 17 yards to the USF 42. Two short gains later, Parsley came on and hit a high, wobbly kick that just cleared the cross bar. It was the longest field goal of his career by 11 yards and sent the game into overtime.

Harding scored on two long drives in the first half and led 14-10 at halftime. Sioux Falls scored on a 29-yard Brett Garner field goal on its first possession of the game.

Harding took its first lead on its first drive of second quarter. The Bisons drove 92 yards on 11 plays with Parish scoring his school-record 20th rushing touchdown of the season. It was Harding’s 60th rushing touchdown. Dwayne Carter had two key runs during the drive, including a 35-yard sprint to the right side that moved the ball into Sioux Falls territory.

Field position keyed Sioux Falls’ second scoring drive. Cougar punter Stuart Vanden Heuvel pinned the Bisons deep at the 1-yard line. Harding did not get a first down on their drive and punted to the HU 43. Sioux Falls needed seven plays to cover the 43 yards and scored on a 3-yard Luke Papilion run.

Harding answered with its second long scoring drive of the half. The Bisons went 73 yards on seven plays in only 2:45 with Parish connecting with tight end Luke Bowser for Harding’s fifth passing touchdown of the season. Another pass, a 27-yard hook up with Dather, moved Harding down to the Sioux Falls 10. The Bisons scored three plays later.

Harding, Division II’s top rushing offense, ran for 332 yards and pulled within 40 yards of 5,000 for the season. Parish led the Bisons with 121 yards on 25 carries, and Shelley had 73 on nine rushes. Parish completed 4-of-9 passes for 49 yards and a touchdown, and Dather caught three passes for 63 yards.

Sioux Falls came into the game averaging 528 yards of total offense, but the Bisons held the Cougars to only 306. Sioux Falls averaged 322 rushing yards, but had only 132 on Saturday.