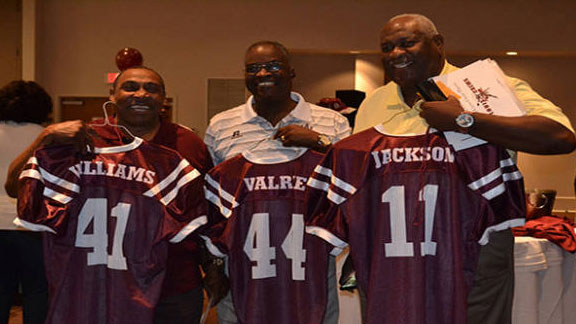 HUNTSVILLE — When the New England Patriots take the field Thursday night with starting quarterback Jacoby Brissett, former Alabama A&M quarterback Onree Jackson will have a little smile on his face.

Jackson, who led the 1966 Bulldogs to an unbeaten regular season and the Southern Intercollegiate Athletic Conference championship, was drafted by the then-Boston Patriots of the old American Football League in 1967. When his name was announced, Jackson became the first black quarterback of a predominantly black university to be drafted as a quarterback by a professional football league.

The reason he will be smiling is Brissett will become the first black starting quarterback for the Patriots.

Unlike when Jackson was drafted nearly a half-century ago, it’s not unusual to see a black quarterback in the NFL today.

“Things are a lot different now than they were then,” Jackson said. “You expect a black quarterback to be in a lot of games.

“I was one of the pioneers … I took the first step.”

Jackson was released by the Patriots, though, before the regular season.

Recently, Jackson was part of another football milestone.

Last weekend, he joined some of his Bulldog teammates for the Louis Crews Classic Breakfast. The annual fund-raiser salutes Crews, Alabama A&M’s all-time winningest coach, and this year celebrated the golden anniversary of the 1966 Bulldogs.

Of course, tales were told and there was some embellishing going on.

And the coincidence of the two events occurring so close together didn’t escape Jackson.

“It is ironic that they happened at the same time,” he said.

In the meantime, Jackson said he’ll watch the game and cheer on the Patriots.