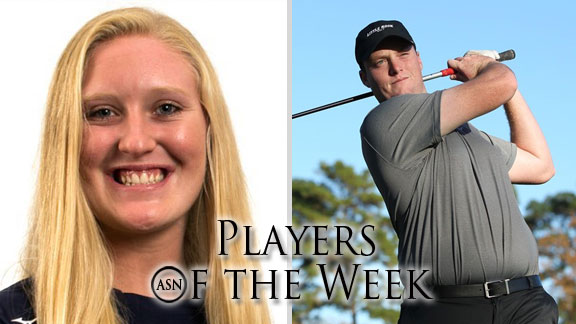 This week’s Arkansas college Players of the Week are Carly McKinney, JBU, and Noah Tullos, LR.

The freshman had only nine kills to go with 18 digs in her first collegiate match. She had double-doubles in the other three matches at the Johnson and Wales (Colo.) Tournament and helped her team to a 4-0 record to start the season. McKinney is averaging 3.82 digs per set and 3.17 kills per set while hitting .335 for the tournament and the season so far.

Tullos won the Arkansas State Golf Association Match Play championship this week. He had to go against his Little Rock teammate, Zach Coats, in the final and took that round 2 and 1. Tullos won five head-to-head competitions in the 32-man bracket during a three-day stretch and played the semifinals and the finals both on Sunday, due to rain on Saturday.