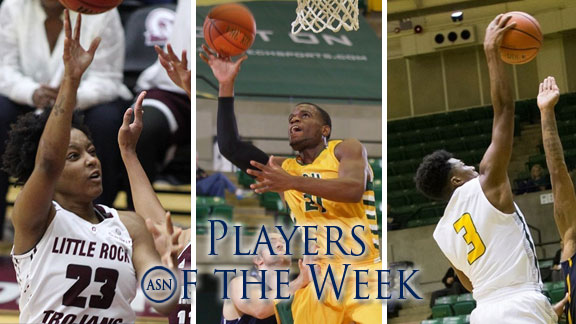 This week’s Arkansas college Players of the Week are Kyra Collier, LR, and Bennie Lufile and Alex Brown, ATU.

Collier closed out 2016 averaging a double-double in her final two games, while very nearly getting a triple-double on New Year’s Eve, and was actually on pace for a quadruple-double if her team hadn’t been in such complete control of the game that her efforts weren’t needed. The freshman averaged 14.5 points and 10.0 rebounds in wins over Louisiana and Louisiana-Monroe last week. Collier also recorded 13 points, nine rebounds and nine assists in the 78-34 win over ULM, of which she had nine points, five rebounds, eight assists to go with five steals by halftime and LR was on top comfortably, 41-9.

Arkansas Tech finished the calendar year and the non-conference portion of its schedule with a 91-88 overtime win over Missouri S&T and got big play from both Lufile and Brown to get it done. Lufile recorded a big time double-double with 18 points and 22 rebounds, 11 offensive and 11 defensive. The rebounding mark is a new school record. And Brown simply put the ball in the basket. The sophomore scored 40 points, making seven three-pointers on the night and scoring seven of the Wonder Boys’ 11 points in the extra period for the win.