Reddies roll to win over UAM 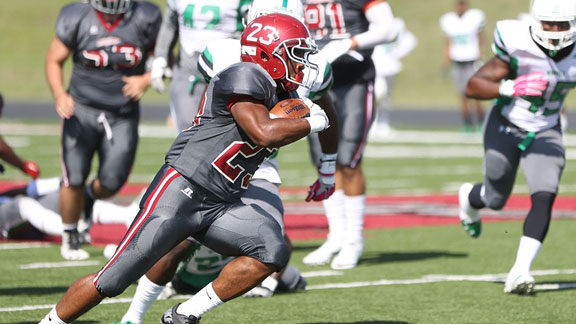 ARKADELPHIA – Henderson State compiled over 500 yards of offense as the No. 15 Reddies defeated Arkansas-Monticello 45-17, Saturday at Carpenter-Haygood Stadium/Ruggles Field in Arkadelphia, Ark.

With the win, head coach Scott Maxfield secured his seventh straight winning season at Henderson becoming the only coach in HSU football history to accomplish the feat.

Henderson, 6-1 this season, scored on its opening possession as Jaquan Cole broke free for a 46-yard scamper just 90 seconds into the game.

UAM, 2-5 on the year, put together an 11-play, 59-yard drive capped off by an 18-yard field goal with 8:33 left in the quarter. The Weevils had 1st-and-goal on the Reddie 6, but big defensive plays by Gary Vines and Cameron Sonnier kept UAM from reaching pay dirt.

Cole would score his second touchdown of the game just before the end of the quarter plunging in from 6 yards out to make the score 14-3. Andrew Black had a 22-yard rush on the drive and the hit Zacari Lavender on a 14-yard pass to set up the score.

Jeremy Wilson picked up his longest rush of the year early in the second quarter with a 78 touchdown jaunt to put Henderson on top 21-3.

UAM would cut into the deficit late in the half on a 7-yard touchdown toss from Cole Sears to Jalen Tolliver.

However, the Reddies quickly answered as Black would spin out of several tackles and go 62-yards to the UAM end zone to give Henderson a 28-10 advantage at the break.

Houston Ray set the Henderson career field goal record with a 23-yard kick to begin the scoring in the second half to extend the Reddie lead to 31-10. Ray increased his career total to 42 field goals surpassing Bo Adkisson who had 41 from 1974 to 1977.

UAM put together a 19-play, 75-yard drive on its next possession with Sears scoring on a 1-yard dive to make the score 31-17 with 2:56 remaining in the third quarter.

Again Henderson responded quickly as Evan Lassiter moved the Reddies down field with a 24-yard pass to Wilson, followed by an 8-yard toss to Lavender. Wilson then scored on a two-yard plunge to put the Reddies back in front by 21 points.

The final score came on Henderson’s next possession with Lassiter hitting Cole for a 49-yard score on the first play from scrimmage.

Henderson would finish with 513 yards of offense on just 55 plays including 295 rushing yards. UAM compiled 410 yards, running an astonishing 94 plays.

Wilson led the Henderson rushing attack with 98 yards on 10 carries, while Black had 90 yards on 5 attempts and Cole carried the ball 6 times for 76 yards.

Defensively the Reddies were led by Sonnier with 14 tackles including 1 ½ stops for lost yardage. Dondre Wright followed with nine tackles and a pair of pass breakups.

The Reddies totaled 11 pass breakups for the game with Sheldon Watson and Jonathan Edouard both having an interception and Malik Brown a fumble recovery.

Henderson State will next travel to El Dorado, Ark. on Saturday, October 22, to face Southern Arkansas in the Murphy USA Classic. Kickoff is set for 2 pm at Memorial Stadium.