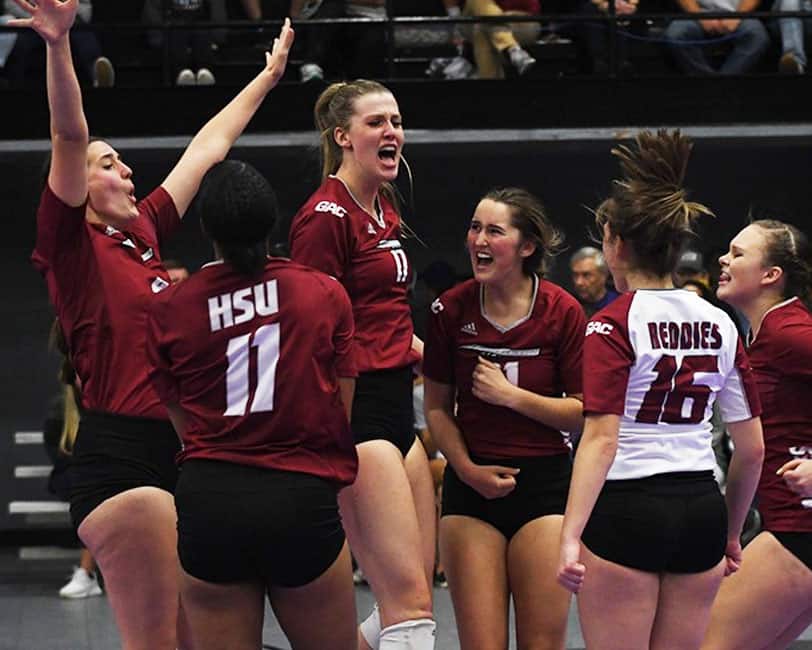 SET ONE
Like any rivalry, the inception of the contest was extremely competitive, as neither team could score consecutively through the first 16 points of the match. It was Henderson however, that was able to breakthrough with the match’s first run. With the score knotted at 8-8, a kill from Courtney Bolf gave the Reddies a 10-8 advantage. Moments later, two-straight aces from Gigi Garramone gave HSU its biggest lead of the evening, forcing the Tigers into a timeout with the score 13-9. The stoppage didn’t help OBU, as kills from Bolf and Ondruskova extended the Reddies lead to six, 19-13. OBU picked up two points in a row to make the score 20-16, but Henderson finished the set on a convincing 5-2 run to take the set, and the match lead, 25-18.

SET TWO
The Reddies looked as if they had carried their first set momentum into the second frame after two mid-court kills from Karlie Greene gave HSU a quick 2-0 lead. The advantage would not last long however, as the Tigers clawed back into the lead, 4-3. OBU continued to build on its comeback, using an 8-1 run to take a 12-5 advantage. The Reddies got two kills from Tyasia McGruder which helped them pull within three, but OBU quickly rebuffed the Reddies run and ended the set on an 11-4 spurt to even the match with a 25-15 set win.

SET FOUR
The Reddies got off to another fast start in the fourth frame as kills from Ondruskova and Tyasia McGruderhad Henderson up 3-1. Leading 4-3, a kill and an ace by Bolf spring-boarded the Reddies to a 6-0 run which was bookended by a combined block from Hartmann and Alex Tyler, forcing OBU into a timeout with the score 10-3. The Tigers roared back after the break, winning eight out of the next nine points to tie the score at 11-11. With the set tied 13-13, the Reddies got a timely ace from Blackburn, followed by kills from McGruder and Bolf to reestablish a 17-13 lead. As the fourth set wound down, Courtney Bolf took over. She notched three impressive kills in five points and helped the Reddies get out to a 23-17 lead. Kills by Hartmann and Ondruskova finished the set in Henderson’s favor, 25-19, and forced a fifth frame.

SET FIVE
The Tigers struck first in the deciding set, but the Reddies quickly reclaimed the lead behind two center-court kills from Greene. After OBU tied the set at 2-2, a cross-court kill from McGruder put the Reddies back in front. OBU played catch up, but could not tie the score as the set reached its midway point. With HSU up 8-6, Kenzie Thoman showed off her athleticism and displayed heroics with a full extension dive to keep the ball in play. The point was eventually won by the Reddies after another McGruder kill gave Henderson its largest lead of the set, 9-6. Ouachita, stunned by the defensive work of Thoman, was unable to recover, and the Reddies slowly pulled away before another combination block from Hartmann and Tyler gave the Reddies the set, the match, and the sweep, 15-9.