Ronnie Huckeba to step down at Harding after 2016 season 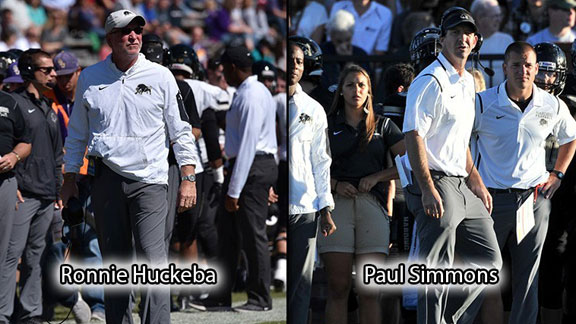 Huckeba announced Wednesday that he will retire when the season ends. Athletic Director Greg Harnden named Paul Simmons, Harding’s current defensive coordinator, as the head coach beginning in 2017. Simmons will be the 13th head football coach in program history and sixth since Harding restarted intercollegiate football in 1959.

“I am a very lucky man,” Huckeba said. “It has been such a blessing to be part of Harding football since 1973, and I am beyond excited for the start of the 2016 season. I am looking at this year as my senior season as a coach at Harding, and your senior season comes with an even greater sense of urgency. I am thankful to share this season with a very special group of coaches, players and support personnel.”

Huckeba is entering his 10th season as head coach of the Bisons and his 31st on the coaching staff. He has led Harding to four consecutive winning seasons that included three straight nine-win campaigns and three postseason appearances.

“I am ever grateful to Dr. David Burks, Greg Harnden and Dr. Bruce McLarty for their continued faith and support during my time as a coach at Harding,” Huckeba said.

“Coach Huckeba has been very special to our football program,” Harnden said. “He is a great on-the-field coach and outstanding motivator. He cares about his players, more than anyone knows, both on and off the field. Coach Huckeba also is a great friend.”

Huckeba was a standout offensive lineman for the Bisons from 1973-76 and started at guard on Harding’s 1976 Arkansas Intercollegiate Conference co-championship squad.

Simmons is entering his 11th season as an assistant coach at Harding. He has coached the defensive line in his first 10 seasons and added the title of assistant head coach in 2008. Simmons has been Harding’s defensive coordinator since 2010 and has overseen a powerful squad.

“I am so pleased that Coach Simmons will lead the program after this season,” Huckeba said. “He has been my right-hand man since I became head coach and has been a major reason for our success.”

In 2010, Harding’s defense led the nation and set a school record with 43 sacks. In the last five seasons, the Bisons have led the conference in total defense four times and scoring and rush defense three times. Simmons’ defenses have regularly finished among Division II’s best in run prevention and sacks.

“Coach Simmons has the needed experience to lead our program,” Harnden said. “He is a great recruiter, fundraiser and a great example for our young men. Harding is extremely fortunate to have Coach Simmons on our staff and ready to take the reins of the football program.”

Simmons was a three-time All-America honoree at Harding as a linebacker and defensive end. He compiled 415 career tackles and 18 sacks and was inducted into the Harding Athletics Hall of Fame in 1999.

“Harding football has been an unbelievable blessing in my life,” Simmons said. “A great deal of who I am as a Christian man, father and husband, I learned during my time playing football here at Harding. I am extremely grateful for and humbled by this opportunity.”

Most of Harding’s 2016 team arrived Wednesday, and practices begin Thursday in preparation for the Bisons’ season and home opener against Oklahoma Baptist on Saturday, Sept. 3, at 6 p.m.

“It is my desire that we keep the focus on our football team and not on me during the course of this season,” Huckeba said. “We, as a team, have every intention of making 2016 a year to remember!”