SAU’s Gallegos promoted to Assistant Director of Athletics for Communications 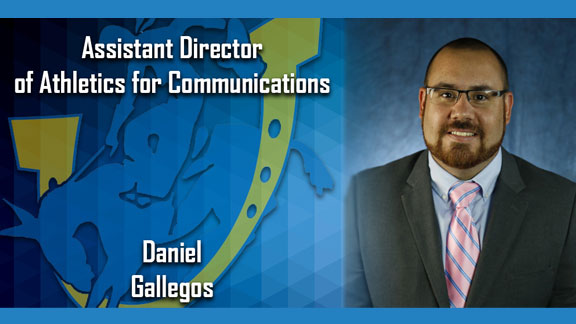 “I am pleased to announce that Daniel Gallegos has been promoted to Assistant Director of Athletics for Communications.  In his time here Daniel has done an unbelievable job of promoting not only our athletic department but most importantly the wonderful achievements of our student-athletes of the past and present,” stated Browning. “Daniel has showed wonderful leadership to those that work with him and has proved to be a great asset to Mulerider Athletics. His unrivaled work ethic, professionalism, and commitment to success have not gone unnoticed by our administration, coaches, student-athletes, fans, or alumni.”

Gallegos is currently in his fourth year with Mulerider Athletics and has overseen the growth of the sports information department at SAU that has included a digital overhaul with the creation of social media channels, a newly designed athletics website and complete live streaming capabilities of all Mulerider and Lady Mulerider home events as well as a greater emphasis on fan engagement.

Before coming to Southern Arkansas in January of 2013, Gallegos served in several athletic communication roles as an assistant at the University of the Ozarks, Allegheny College, and at Henderson State, where he was responsible for all aspects of media relations for the sports covered including writing student-athlete features, general, and pre/post-game press releases as well as providing play-by-play and color commentary on numerous radio broadcasts at each stop.

A graduate of the University of the Ozarks in May of 2010 with a Bachelor of Arts Degree in Strategic Communications, Gallegos earned his Master’s Degree in Sports Administration from Henderson State in May of 2013.

Gallegos is married to the former Kylie Venable and the couple has one daughter, Parker Grace. The Gallegos’ currently reside in Magnolia.