Scots look to stay focused to make another postseason run 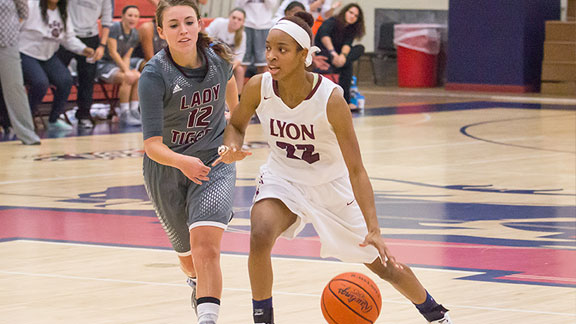 In 2015-16, Lyon finished 30-4, which was the best finish in program history. The Scots also boasted a 19-game winning streak and finished the season ranked No. 4 in the NAIA Top 25 Poll.

“My hope is that they will be encouraged to look at the model that last year’s group set,” Stewart-Lange said. “Maybe we won’t have the same playmaking abilities in every spot, but this group will come together similar to last year and follow the model in many areas that they can copy and allow us to get back to the top.”

Carina Jackson, Taylor Gaedtke, Taylor Grigg and Gabriela Martins all graduated. The Scots will look to replace the production of Jackson’s 12.7 points and Gaedtke’s 8.1 points per game from a year ago. Martins and Grigg also combined for 133 assists.

Jamie Jackson and Elliot Taylor are two of the team’s seniors who will be part of a group that has experience playing important roles. Jackson is coming off a year in which she averaged 14.0 points and 3.8 steals per game, while also garnering NAIA Second Team All-America and AMC Defensive Player of the Year honors.

Taylor was named an AMC All-Conference honorable mention and averaged 8.8 points per game, while shooting 53.9 percent from the field.

Stewart-Lange said last year’s mindset was the best she’s ever seen from a group.

“Our leadership was so strong and the group last year was very focused,” Stewart-Lange said. “This year’s group has to have that same chemistry and cohesiveness and come in together as one. That same attitude came from a group that didn’t plays as many minutes, but they’ve seen it from the group in front of them.”

Hailey Hastings, Kelsey Smith and Kaci Hall round out the seniors on the squad. Hastings appeared in 29 games last year, while Smith played in 14 and Hall played in 13 contests.

Sarah Elkins also made an impact last year for the Scots and will look to play an even bigger role this season. Other key players who return experience are Allison Tackett, Samantha French, Whitney O’Dell and Ali Tucker.

“Allison is really prepared and could fill some larger roles,” Stewart-Lange said. “Sammie played some limited minutes and we are expecting more production from her this year in the post area. Whitney could fulfill a bigger capacity and Ali will be a player who pushes for more time. She has come back more fit this year and has really worked on her quickness and improved defensively.”

One position that is vital to any team is the point guard spot. Lyon will have to fill the void with Martins and Grigg gone. This year they bring in Oklahoma Baptist University transfer Kiara Moore, while also looking for Smith, Taylor McGraw and Tressa Linson to help fill in as the floor general.

“Kiara has great experience from a great program and a lot of her potential to fill in will be how quickly she learns and is able to implement our system,” Stewart-Lange said. “We also have Kelsey, Taylor and Tressa so I think there are a lot of options and I like what I’ve seen from all of them so far.”

McGraw, Henderson and Riley were each All-State selections in high school, while Ratliff is a Batesville, native who played basketball for the hometown Pioneers.

Lange said this year’s recruiting class is the best from top to bottom with their abilities and how quickly they have learned.

“I think expectations of our program top to bottom with effort, work ethic and a cohesive group will be important,” Stewart-Lange said. “They have great leadership above them and can learn what is expected of us on and off the floor.

“With the loss of Taylor (Gaedtke) and her intensity every day, she did great things for us defensively and I’m starting to see that same mentality from different people.”

Lyon may go into the conference season with a target on their back after last year’s run, but the Scots know how tough the conference can be game in and game out.

Stewart-Lange said the conference should be filled with more competition than ever before.

“Freed-Hardeman and Columbia will be as good as they’ve ever been,” Stewart-Lange said. “Williams Baptist will be very strong and Harris-Stowe is right there knocking on the door as they made huge strides and continued to get better mid-year. Park is also always athletic.

“Our kids learned last year that there are no easy nights, and if you’re not ready there’s always teams that will knock someone off early on their home court. It’s difficult to be at your best each night and we know that we have to step out and get better every day so we can put a good product out on the floor.”

Lyon opens the 2016-17 season inside Becknell Gymnasium against College of the Ozarks (Mo.) on Nov. 1 at 5:30 p.m. The Scots then take a road trip to Shreveport, La., on Nov. 11-12 to face Louisiana State University-Shreveport and 2015-16’s longtime nationally-ranked No. 1 team Our Lady of the Lake University (Texas). The squad will then open AMC competition at home on Nov. 17 and 19 against William Woods University and Columbia College.