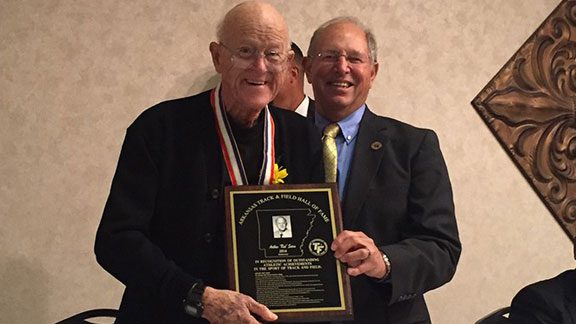 NORTH LITTLE ROCK – Hendrix College alum Arthur “Red Sears” was inducted into the Arkansas Track and Field Hall of Fame as part of the inducted class on Jun. 3 at the Wyndham Riverfront Hotel in North Little Rock.

Sears, class of 1953, was the high point man at the Arkansas Intercollegiate Conference track meets for two years and set records in the 100 and 440 yard dashes. He was an outstanding sprinter at Hot Springs High School. In 1949, he won high point honors at the Arkansas State Championships by winning the 100 in 10.3 seconds, the 220 in 23.5, and the 440 in 51.8.

After that season, the Associated Press labeled him “The Greatest Sprinter in AIC History”. In 1953, Sears was also named the winner of the AAU’s Neil Martin Trophy as the outstanding Arkansas Amateur Athlete.

After graduation, he served for five years in the United States Navy. Following his service, he earned a Master’s degree and spent more than 40 years working for the YMCA on the west coast and in the southwest. He was a volunteer official starter for youth and college track meets in New Mexico and Texas.

Now retired, he and his wife Pat live in Sun City West, Ariz. Sears was inducted into the Hendrix College Sports Hall of Honor in 1998.

Sears is the ninth inductee into the Arkansas Track and Field Hall of Fame from Hendrix.