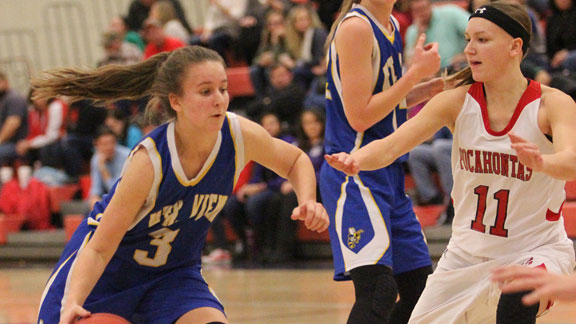 The last two games of the day were the boys’ and girls’ High School Tournament championships. In the girls’ championship, Mountain View faced off against Pocahontas. Both teams battled the entire way, and down the stretch Kaley Shipman hit two free throws for Mountain View as the Lady Yellow Jackets sealed a 48-45 win for the tournament crown. In the boys’ championship, Cave City faced off against Southside, where Southside sprinted past Cave City, 66-36 behind Grant Patterson’s 31 points.

Southside sophomore Grant Patterson was named the tournament Most Valuable Player in the Boys’ Division after leading the Southerners to the title. Other members of the boys’ all-tournament team included: Will Sitkowski of Southside; Clayton Hale of Pocahontas; Justus Cooper of Izard County and Blaine Bacon and Matt Miller of Cave City. Southside head coach Brad McGhee received the Coaches’ Award.

Southside ran away with the boys’ tournament championship with a 66-36 victory over Cave City Saturday evening. The Southerners led 36-16 at halftime, before scoring another 30 points in the second half to outrun the Cavemen.

Southside was led by Grant Patterson’s 31 points, while Will Sitkowski had 12 points. Alex Brogdon also added double-figures with 11 points.

Cave City’s top scorer was Blaine Bacon, as he had 13 points. Jace Patterson was second with 10 points, while Curt Jones had six.

Highland was led by Preston Gurley and Tristan Hudson’s eight points. Matt Price and Ian McGinnis had six points apiece for the Rebels.

Mountain View won a nail-biter against Pocahontas in the girls’ tournament championship game, Saturday evening at Lyon College. Kaley Shipman sank two free throws with less than eight seconds left to put the Lady Yellow Jackets up three points. Mountain View then played strong defense in the end as they defeated Pocahontas 48-45 to claim the crown.

Izard County defeated Calico Rock in the girls’ consolation championship game, for the day’s first set of action. The Lady Cougars scored 31 points in the second half, while holding the Lady Pirates to 14 points in both halves to win 51-28.