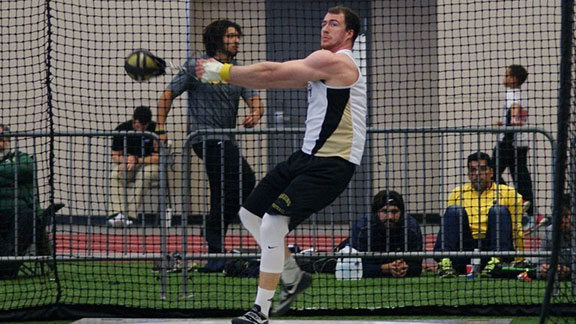 PITTSBURG, Kan. – Harding senior Josh Syrotchen broke his own school record in the indoor weight throw at the Crimson and Gold Invitational on Saturday. The indoor track and field meet was hosted by Pittsburg State University inside the Robert W. Plaster Center.

Syrotchen, of Spokane, Washington, placed second in the weight throw with a mark of 59 feet, 9 inches, breaking his old mark of 57-01 set at Emory last season. His mark is also his second straight NCAA provisional of the season. Last week at Arkansas State, he threw 56-06.50. Syrotchen is now ranked 11th in Division II in the event. The top 20 qualify for the national meet at the end of the season.

Harding also had three top-10 finishes in the running events.

Camden Barrett, a sophomore from West Plains, Missouri, placed fifth in the 800 meters in 1 minute, 55.32 seconds. It was his first career 800-meter race, but it was the sixth-fastest 800 meters in program history.

Lucas Goodspeed, a senior from Houston, placed eighth in the 3,000 meters in 8:50.70, and Russell Chase, a senior from Reno, Nevada, was ninth in 8:51.35. The times were career bests for both runners.

Harding’s full team will be in action again on Jan. 21 at the Missouri Southern Invitational in Joplin.