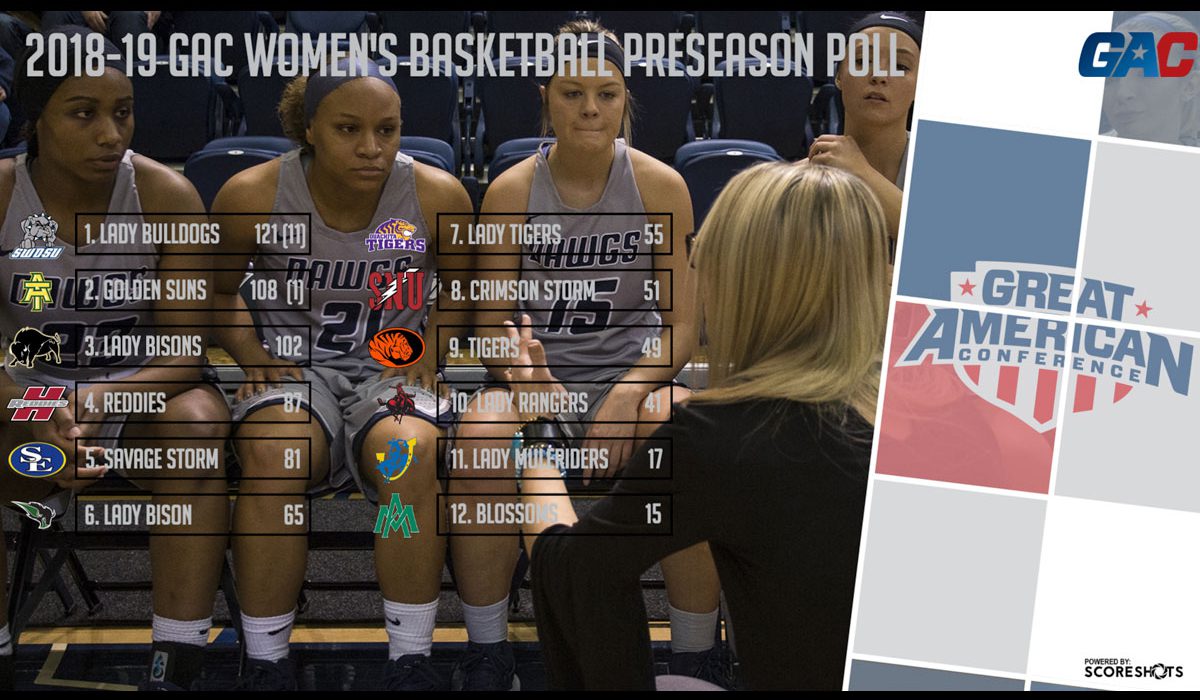 The Lady Bulldogs collected the first-place votes from all of the conference’s 11 other head coaches. They return all five starters from a 26-5 squad, highlighted by All-American Hailey Tucker. She also earned the D2CCA Central Region Player of the Year award and her second-straight GAC Player of the Year honor. She averaged a league-leading 20.5 points, plus 7.5 rebounds and 1.8 blocks per game. She enters the season 134 points away from setting the GAC’s all-time scoring record.

In addition to Tucker, SWOSU brings back Tyra Aska, the league’s Defensive Player of the Year, and Hayden Priddy, a two-time First-Team All-GAC pick. Aska, who also made the All-GAC Second Team, averaged 14.0 points, 3.2 assists and 1.8 steals per game. Priddy ranked fifth in the GAC in scoring, 15.4 per game. She ranked third with 4.5 assists per game and with a 42.0 3-point field goal percentage. Bethany Franks led the conference and ranked second amongst DII freshmen by pulling down 9.8 rebounds per game.

Arkansas Tech, the 2018 GAC Tournament champions, placed second in the poll. The Golden Suns bring back three double-digit scores in Lyrik Williams, Jayana Sanders and Ke’Vonshaye Stackhouse. Williams averaged 12.9 points and 8.1 rebounds. Sanders led all GAC freshmen in scoring at 12.3 points per game. Stackhouse finished as the only player in the conference to rank in the top seven in field goal percentage and 3-point field goal percentage.

Harding finished third in the voting. They return only two players with multiple years of experience, Peyton Padgett and Jenni Nadeau. Kellie Lampo garnered the conference’s Freshman of the Year after she averaged 12.2 points and 6.2 rebounds and connected on 48.4 percent of her shots.

Henderson State took fourth in the balloting. The Reddies turned in the sixth-best win increase in the country last year as they went 21-9 to register their first 20-win season since 2005-06. Pink Jones earned First-Team All-GAC honors after she averaged 16.3 points, 3.8 assists and 1.8 steals. She shot 48.7 percent from the field, the fourth-highest mark in the conference.

Southeastern Oklahoma State placed fifth, followed by Oklahoma Baptist. Katie Webb, limited to just nine games a year ago, returns to the Savage Storm for her junior season. She averaged 18.8 points per game in her restricted action. A pair of redshirt seniors will pace the Lady Bison. McKenzie Cooper, a First-Team All-GAC honoree, ranked third in the league in scoring at 17.1 points per game. She tied for first in made 3-point field goals and led in 3-point field goal percentage. They welcome back Katy Custer, a 2016-17 All-GAC Honorable Mention selection, from a redshirt season. She averaged 14.5 points that season and shot 38.3 percent from the 3-point arc.

Ouachita finished seventh, four points ahead of Southern Nazarene and six clear of East Central with Northwestern Oklahoma State in 10th. The Tigers must replace five of their top seven scorers. The Crimson Storm hired Trent May as its new head coach. He inherits Adrienne Berry, an All-GAC Second-Team pick, and Abby Niehues, who led the conference in blocks.

Southern Arkansas and Arkansas-Monticello rounded out the poll. Adam Collins takes over as the head coach for the Lady Muleriders.

The regular season begins on Friday, Nov. 9 with all 12 teams in action.