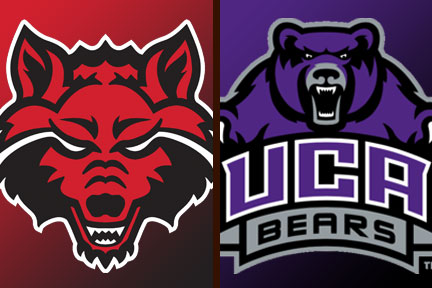 CONWAY – Donte Thomas dished out a career high 13 assists, none bigger than an alley-oop to C.J. Foster that sparked a 21-4 run as Arkansas State men’s basketball left Central Arkansas with an 89-77 victory.

The victory improved the Red Wolves to 9-2 on the season, the best start by an A-State team since 2003-04. The win also marked the fourth non-conference road win, most in a single-season since the 1986-87 team had four such wins.

Devin Carter followed his record breaking 3-point outing with a game-high 20 points while Deven Simms equaled his career high with 19 points on 8-of-9 shooting. Connor Kern (11) and Tamas Bruce (10) also reached double figures to help A-State to 80-plus points in back-to-back games. Derreck Brooks led Central Arkansas (1-10) with 12 points and he was one of four players in double figures.

“We had some big turning points at halftime, but we have a ton of respect for Central Arkansas and Coach Pennell,” said A-State head coach Grant McCasland. “They are really close to getting this thing going and I think you’ll see that when they hit conference play. They were great tonight and put us on our heels in transition.”

“At halftime, I was all over Donte Thomas, but he was special in the second half. Finishing with 13 assists and one turnover is a phenomenal effort. He gave us a ton of energy and out of the timeout, (associate head coach) Ross Hodge calls the alley-oop play that Donte threw to C.J. and that was such a pivotal play. Simms was super-efficient and C.J. was solid again, but the guy that made the difference was Connor Kern. He made huge shots, but he stole the ball on one end, blocked a shot on a wide open layup and then finger rolled in a layup on the other end. Donte Thomas and Connor Kern in the second half really changed this game.”

“This time of year, you just go play and we are excited about our next opportunity,” McCasland said. “More importantly though, I’m excited that we found a way to win this one. They had one big push in them, but we had guys step up and make the small plays when it mattered most.”

A-State returns to action Wednesday at the Rocket City Classic in Huntsville, Ala., with an 8 p.m. matchup against Alabama. The game will air on SEC Network+ and be available on Watch ESPN and the ESPN3 platform.