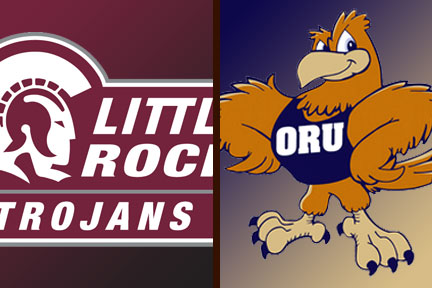 TULSA – Little Rock fell to 9-3 with a 63-48 loss at Oral Roberts (3-10) on Monday night at The Mabee Center.
The Trojans finished the game shooting 34.5 percent from the floor and were 0-15 from the 3-point line. It was Little Rock’s first game without a made 3 since Nov. 2013. The Trojans committed 15 turnovers in the game.
Oral Roberts shot 37.5 percent from the floor but made 7 of 19 3-pointers. The Golden Eagles were 14 of 18 from the free throw line on the night.
Little Rock trailed by six at the break and trimmed the margin to four in the second half, but Oral Roberts used a 16-4 run to grow its lead to 54-38 with 6:42 to play and the Trojans pulled no closer than 10 the rest of the way.
Maurius Hill led Little Rock with 13 points while adding eight rebounds. Jalen Jackson scored 12 points and had six rebounds and four steals. Lis Shoshi finished with six points, 14 rebounds, four block and four steals.
ORU was led by Jalen Bradley’s 14 points. Anderson scored 12 and grabbed eight rebounds.
The Trojans trailed 27-21 at halftime after shooting 26.9 percent over the first 20 minutes. Oral Roberts only shot 39.3 percent from the floor but made 5 of 11 3-pointers to take a six-point lead into the locker room.
The Trojans are back in action Wednesday night at Florida in a game that can be seen on the SEC Network and WatchESPN. Tipoff is set for 6 p.m. CST from the new Exactech Arena at the Stephen C. O’Connell Center.