Trojans regroup for win over Lions 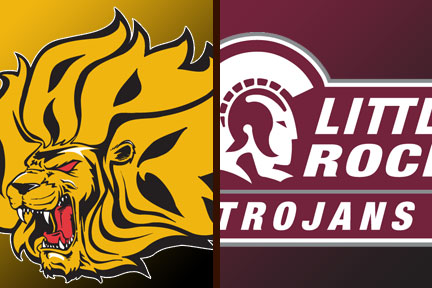 LITTLE ROCK – Little Rock trailed by two at halftime but shot 55.6 percent in the second half to pull away from UAPB (1-8) for a 67-52 win to improve to 7-2 on the season. The Trojans’ defense forced UAPB into 11 second-half turnovers.
Maurius Hill scored a career-best 21 points on 8-of-12 shooting. Jalen Jackson added 16 points on 7-of-8 shooting while Kemy Osse scored 10 points on a 3-of-6 effort from 3.
Little Rock didn’t miss a shot for the first five minutes after halftime and used a 16-0 run through much of the same span to build a 40-28 lead. After UAPB scored the first bucket of the second half, Little Rock hit its next six shots from the floor to go up 12.
UAPB would get as close as six on two occasions, but Little Rock’s lead grew as large as 18 on Oliver Black’s basket that made it 63-45 with 3:41 to play.
Little Rock outrebounded UAPB 37-22 and led 14-6 in second-chance points. The Trojans also led 32-14 in points in the paint.
The Trojans finished the game shooting 45.5 percent from the floor and made 12 of 15 free throws.
After committing eight turnovers in the game’s first 12 minutes, Little Rock steadied its offense and finished the game with 13.
Little Rock scored the final six points of the first half and held UAPB scoreless for the last 3:57, but trailed 26-24 at intermission. The Trojans shot just 38.5 percent and turned it over eight times in the half. UAPB led 11-2 in points off turnovers and made 4 of 11 from 3-point range.
Hill led the Trojans with 12 points at the break.
The Trojans return to action on Saturday against Central Arkansas. Tipoff is set for 3 p.m. from the Jack Stephens Center.