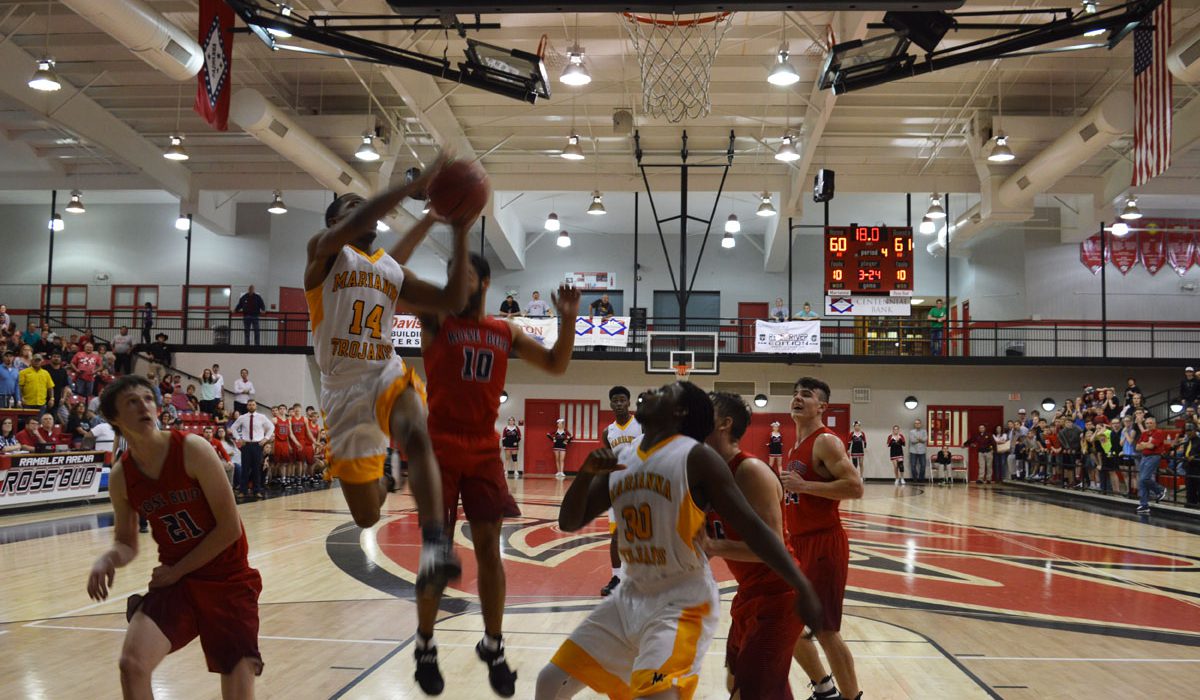 ROSE BUD—The Lee Trojans defeated the Rose Bud Ramblers, 65-61, in the first round of the 3A-2 Regional Tournament on Feb 23. The Trojans won by outscoring the Ramblers 28-16 in an exciting fourth.

John Blanchard led the Trojans with 27 points, including a huge 13 point fourth. TJ Davis had 17 for the Ramblers and Cameron Thornton added 15 before fouling out with 6:10 remaining in the game.

Trojans coach Willie Branch said the key to the fourth quarter surge was all about heart and he even thanked the man upstairs.

“Our boys kept fighting back,” Branch said. “Thank God for the three-point line.”

The Ramblers took a 45-37 lead into the fourth but the Trojans started the quarter on a 6-0 run to make it 45-43 with 5:50 remaining. Blanchard scored five of the six, including a triple from the left wing. After the Ramblers scored the next four unanswered, the Trojans scored five straight off back-to-back steals. Blanchard hit a three from the top of the key off the second Ramblers turnover to make it 49-48 with 3:37 remaining.

The Trojans took their first lead of the fourth after Blanchard hit another triple to make it 51-50 with 3:18 left. There were three lead changes and three ties in the last 3:07 of the game. The Trojans took a three point lead after Dequarious Bailey connected on a double clutch lay-in on the right side of the basket to make it 59-56 with 1:18 remaining.

Trent Reed erupted the home team Ramblers crowd after he hit his only three pointer to tie the game at 59-59 on the next possession with 1:09 left in the fourth. The Trojans tried to hold the ball for the last possession before being intentionally fouled, sending Donoven Lovette to the free throw line. He connected on one, giving the Trojans the one point lead with 40.6 seconds on the clock.

Sean Blacksmith scored on the next Ramblers possession and they held a 61-60 lead with 30 seconds remaining but watched their slim lead slip away as the Trojans scored five unanswered points to close the game. Down one, the Ramblers turned the ball over which led to an easy lay-in for Bailey to extend the Trojans lead to 64-61 with 9.5 seconds remaining. The Ramblers got a look to tie but did not as Davis could not connect from deep.

The Ramblers held a 28-26 at the start of the third. Thornton impressed the crowd after he stole the ball and led the fastbreak before giving it to Hunter Nicholson via behind-the-back pass for the easy layup. Nicholson’s bucket made it 32-29 with 6:50 remaining. The Ramblers extended their lead to seven after Blacksmith hit two free throws with 4:37 left to make it 38-31.

The Trojans pulled within four after a layup from Blanchard off a full court pass to close the gap to 41-37 with 2:41 remaining, but would not score again in the third.

The Trojans never led in the second quarter. The game was tied at 20 before the Ramblers went on a 7-2 run. Bailey pulled the Trojans within two after he recorded a steal and ran the fastbreak for an easy right-handed layup to make it 28-26 with 53 seconds left in the quarter.

The game opened on runs by both teams. The Trojans took a 7-0 lead after converting on back-to-back Ramblers turnovers. After looking lost, the Ramblers responded with an 8-0 run and took the 8-7 lead after Davis caught an inbounds pass alley-oop and laid it in with 4:23 left in the first. The Trojans regained the lead toward the end of the quarter after Blanchard converted on an and-1 off a steal to make it 17-15 with 1:35 remaining.

The Ramblers responded with a Thornton three from the top of the key to make it 18-17 with 43 seconds left in the first.

The Trojans face the Episcopal Wildcats tonight at 8:30 as they look to advance to the 3A-2 Regional Finals.