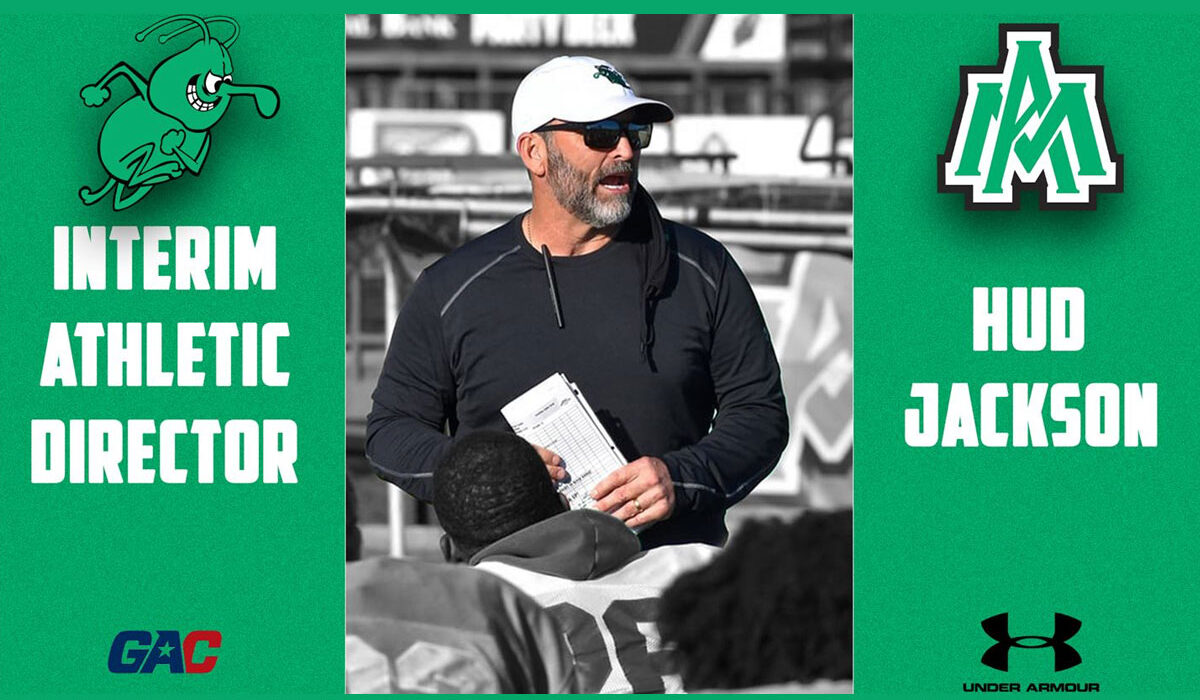 MONTICELLO – University of Arkansas at Monticello chancellor Dr. Peggy Doss announced Thursday the appointment of head football coach William “Hud” Jackson as the institution’s interim athletic director. Jackson’s appointment is effective immediately, according to the email announcement sent to employees and students. The previous director of athletics, Padraic McMeel, left UAM to accept a similar role at Black Hills State University in June. The announcement said the search to fill the AD role has been temporarily suspended but will resume near the start of the next calendar year.

Jackson became the university’s 25th head football coach in 2011. Typical team rosters at UAM range from 100 to 130 student-athletes, on average, making football the largest team on campus. In his decade at the helm of the football program, he has mentored seven All-American honorees, nine All-Region selections, and 40 All-GAC athletes. Several of Jackson’s former players have gone on to play for the NFL, AFL, and CFL. UAM’s invitation to the Corsicana Bowl in 2018 took the Weevils to their first bowl game in 25 years. In the last traditional season (Fall 2019), Jackson’s Weevils set a 4-1 record at home in Cotton Boll Stadium and earned seven Great American Conference (GAC) student-athlete honors, the most for the institution since the conference was created. Currently, Jackson’s 34 wins with UAM mean he holds the second-most football victories in the university’s coaching history.

In a 2019 press conference announcing an extension of Jackson’s coaching contract, his time spent off the field with student-athletes was cited as just as important as garnering wins. When it comes to player recruitment, Jackson prides himself in sourcing regional talent from Arkansas and bordering states as much as possible, and he says a top concern, right along with assessing athletic skill, is the character and dedication of prospective student-athletes.

“When I came in, I knew we needed to prioritize building up and attracting students who are strong athletes, strong people, and strong representatives of our university,” Jackson said. “I think we have made a lot of progress in that area, and we want to continue making that a focus.” When Jackson was announced as the head coach in late 2010, members of the football team had a 19% four-year graduation rate, and now, that rate has increased to 87% at the open-enrollment university.

“Coach Jackson has always demonstrated a commitment to academic success and to engaging student-athletes in campus life.” Chancellor Doss said. “He and his staff play an important role in student achievement and retention. He also knows how to provide and advocate for our students through public outreach and creating strategic partnerships. He is a wonderful representative of our university, active in the community, and is a valued member of our staff. I am pleased to have him serve in this pivotal role during this athletic department leadership transition.”

Dr. Doss said some of his primary duties while serving as interim AD will involve hiring vital staff members in the athletic department, working closely with campus leadership in setting university strategies, and fundraising. “Coach Jackson will be getting us ready for a new academic year and a return to normal athletic events. This is an exciting time for our teams, fans, and university community,” said Doss.

In his decade at UAM, Jackson has served as a mentor to capable program staff, some of whom have gone on to serve as head coaches themselves. Jackson said, “The success of any program is absolutely about who you surround yourself with – that means getting the right student-athletes here as well as finding the best professional team to support them. Without the support of this entire coaching staff, our program wouldn’t be in the place it is today. I have had, and still have, excellent associate and assistant coaches who have made me a better coach- who have made this a better program by bringing their own ideas to the table. My coaching staff is the reason I can take on the interim AD role – I know they’ll make this as smooth a season as possible, and I can’t say enough about what their help means to me and to the athletic department.” Jackson says he will retain some of his typical head coaching duties while assuming the interim responsibilities of athletic director, and that football staff members’ roles may change for the length of that period. He will work closely with the university’s executive leadership team during his appointment as the interim head of athletics.

“I am so appreciative of Dr. Doss for asking me to take on this role, and of course I want to thank my wife Patricia for her support as I take on additional work,” Jackson said. “Monticello and UAM are home for me and my family, and I am honored to serve here. I am excited about my involvement in the athletic department and football program as we continue building on our successes and looking to the future.”

Prior to joining UAM, Jackson spent six seasons at the University of Central Arkansas (UCA) as associate head football coach and director of football operations. The Thibodaux, La. native was an all-state high school baseball athlete who went on to letter in baseball at McNeese State University in Lake Charles, La. In addition to earning MVP and outstanding pitcher awards, Jackson would also start for three years as quarterback for the McNeese State football team. He would go on to coach baseball, football, and serve as athletic director for four Louisiana high school programs before joining the UCA coaching staff.

Founded in 1909 as an agricultural institution, UAM has evolved to meet the growing higher education needs of the residents of Arkansas and the nation. The residential Monticello campus offers more than 80 undergraduate academic tracks and graduate programs, while Colleges of Technology in nearby Crossett McGehee offer technical programs to the region. Additional course and degree offerings are available entirely online. Home to ten NCAA Division II athletic teams, UAM is a member of the Great American Conference. For more information, visit UAMSports.com and follow @UAMSports on social media.