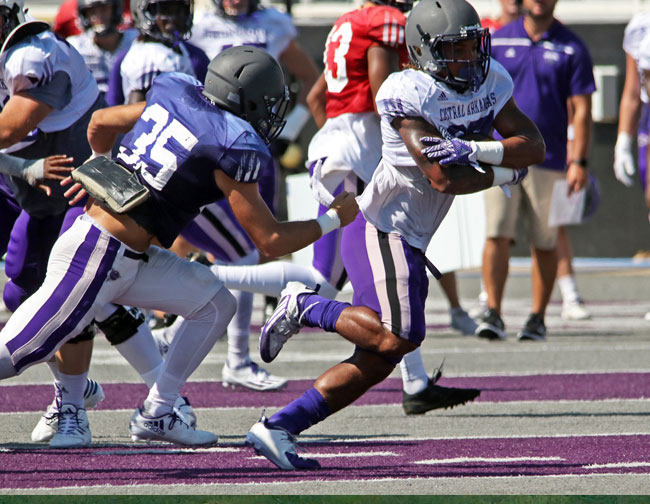 CONWAY – University of Central Arkansas head coach Steve Campbell liked what he saw from his cornerbacks and from his running backs, among others, at Saturday’s third and final scrimmage of fall camp.

The Bears went approximately an hour and a half on a hot, muggy day on “The Stripes” and got a spark from those two position groups.

“I was very pleased with our corner play,’ said Campbell, who saw senior corneback Tavion Garrison intercept a pair of passes. “We had gone after our corners in all three scrimmages, and I really thought they played well today. That was something that I was glad to see. Because we lost a good corner (Tyler Williams) there. We had lost some pass rushers, and I thought our pass rush was better today. So we’re coming on in some areas we needed to come on in.’

Campbell said he saw some bright spots from several younger players after the experienced guys had been showing up more regularly in the first two scrimmages.

“I thought the young guys played well on both sides,’ he said. “Our (No.) 2 defense got off the field against the 1 offense. Our 2 offense scored against the 1 defense. I don’t know if that means something good or bad, but it is what it is. That means there’s some young guys doing well, because I’ve seen that 1 offense do some good things, and I know that 1 defense has some good players on it, I’ve seen them play well. So there were some young guys stepping up and making some plays.’

One of those was redshirt freshman running back D’erek Fernandez, who scored twice for the UCA offense.

“D’erek Fernandez really ran the ball hard,’ said Campbell. “(Redshirt freshman) Dylan Smith continues to gain yards whenever we give him the football. Carlos (Blackman), we tried not to run him too awfully much. But Fernandez ran the ball well, I thought (redshirt freshman) Kierre Crossley, again, I think he had another good day. There were some positives there. Some definite deals where some guys stepped up, and I was proud to see that.’

Senior quarterback Hayden Hildebrand had a rushing touchdown and tossed a touchdown pass to true freshman Brandon Myers in his final preseason scrimmage.
“It wasn’t Hayden’s best day, but Hayden’s best day is really, really good,’ said Campbell. “But I thought he came back after a little bit of a rough start and pulled that group together and got that group going. Hayden is a good football player. Today was not his best day. When Hayden plays his best day, you don’t punt. So that’s our expectations for him, and that’s the level he has been performing.’

“I tell you, (redshirt freshman end) Nathan Grant has showed up a lot to me,’ he said. “(Senior tackle) Eric Jackson on the defensive line. Eric is a really good player. (Tackle) Vidal Scott, we just got cleared through the NCAA Clearinghouse. I don’t know if ya’ll noticed him, but I flat sure did. We had a hard time blocking him. He’s very twitchy and explosive and got upfield fast. A lot of times he was going against some younger guys, but that may be why those younger guys were executing earlier and not executing today. He definitely made his presence felt.’

Campbell was also pleased with the play of his linebackers, led by senior James Graves, UCA’s third-leading returning tackler.

“Roy (Sutton) is a very passionate football player. And Roy always lifts the level up over there,’ said Campbell. “Those linebackers, very, very solid with James Graves,  Raphael Garner and Roy. Then you throw in (transfer) Reggio (Dean), I thought he had a couple of plays, and Matt Hall today.’

What did not please Campbell were several mistakes and miscues on the offensive side.

“There was a lot of good and then a lot of stuff you see we still need to work on. It wasn’t our cleanest scrimmage,’ he said. “We had more balls on the ground than we’ve had the first two weeks combined. I’m going to attribute that just being the third week of a three-week camp. Those are things we need to get corrected and that you don’t need to have. I’ve seen us play cleaner than this.’

Now the Bears’ full attention turns to its first opponent, the Big 12 Kansas State Wildcats on Sept. 2 in Manhattan, Kan.

“Now we’re going to flip the switch big time to Kansas State,’ Campbell said. “This has been a long camp. This is my 30th year and this was our longest camp. But I think it was our best camp. And I think the kids, the ones who have been around awhile, would say that spreading it out probably helped it. It’s been three full weeks and we’ve had, I think, three full days off.

“Now, we’ve worked against ourselves as much as we need to at this point. Now we need to flip the switch and that will give us two full weeks… we play two weeks from today. So it’s kind of like an open week and then a game week. We need to go ahead and get well introduced to Kansas State (this week), and then have a good game week. The attention and focus will definitely switch to them after today.’

The fall semester begins Thursday at UCA as the Bears settle into their normal weekly routine. UCA will be on the road the first two weeks of the season before hosting Southland Conference foe Southeastern Louisiana in the home opener on Sept. 16.