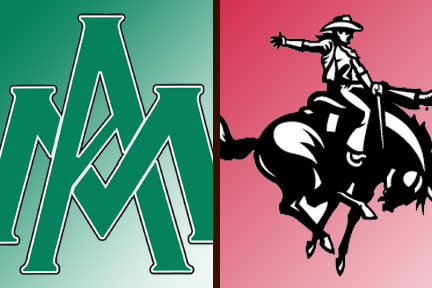 ALVA, Okla. – University of Arkansas at Monticello Football (0-1) faced the Rangers of Northwestern Oklahoma State (1-0) in a shootout in the 2016 season opener for each of these programs with the Rangers coming out on top.

This was an incredibly back-and-forth contest between the two Great American Conference opponents as each seemed to always have an answer for the other throughout the match-up. The final score was 59-56 in favor of Northwestern.

Northwestern jumped out to a 7-0 quick lead in this season opening contest but Arkansas at Monticello found their way into the end-zone on the next possession as Cole Sears would find Jalen Tolliver for the 65 yard score to even things up at 7-7.

The Rangers continued to move the ball through the air against the visiting Weevils and saw themselves with a 21-7 lead heading into the second quarter. UAM found a spark on the defensive side of the ball however in the second quarter with an interception by Ed Smith which set up Monticello with fantastic field position. Jeremy Jackson went on to find his way into the end-zone for the touchdown to cut into the home lead and make it 21-14 midway through the quarter.

Northwestern opened up the third quarter with a quick touchdown to extend their lead to 35-14 over UAM and continued to put pressure on the visitors as the home team saw leads as big as 28 points throughout this quarter. The Weevils notched a rushing touchdown midway through the third quarter as Brett Courville punched in the score from three yards out to put the score at 35-21. NWOSU quickly answered on multiple occasions unfortunately to push their second half lead out to 49-21.

Monticello put six on the board right out of the gate in the fourth quarter as Sears connected with Austin Harris for the 22 yard touchdown as the Weevils cut into the Northwestern lead at 49-28.

The Weevils would not go quietly in this season opener after a receiving touchdown by Nathan Crouch inched the visitors closer to the Ranger lead, which was immediately followed by a successful onside kick recovery by UAM. The next possession for Monticello saw Jeremy Jackson power his way into the end-zone, putting the home lead at only seven points with the score at 49-42. Sears went on to find Tolliver once again late in the fourth quarter but a failed two point conversation attempt left the score at 49-48 Northwestern, with just over two minutes in the game.

NWOSU went on to score once again with a rushing touchdown with 1:45 remaining in the contest, but UAM did what they had done best all night long and that was find an answer to the Rangers. Sears found Tolliver deep down the left side of the field for the 39-yard touchdown which put the Weevils within only two points. Monticello converted on the two point conversion this time around and tied up the game at 56-56. Northwestern ultimately was able to make a few big plays down the stretch with under a minute remaining to set themselves up for a 24 yard field goal which went on to seal the game at 59-56.

Leading the way for the Weevils on opening night was Jalen Tolliver and Nathan Crouch in the receiving game as Tolliver finished with 204 yards with three touchdowns on nine catches and Crouch racked up 200 yards, 10 catches and 1 touchdown overall.

Cole Sears had quite a game passing the ball as he went 33-55 for 533 total yards and six touchdowns. Sears set the all-time UAM record for passing yards in a single game with his effort and tied the single-game Monticello record for total passing touchdowns in a game as well.

Jeremy Jackson provided a solid game on the ground as he went on to have 27 total rushing yards and was able to score one touchdown and added 40 receiving yards and a touchdown reception as well. On the defensive side of the ball C.J. Hawkins led the Weevil defense with eight total tackles, and Ed Smith provided a solid effort finishing the game with one interception and six overall tackles.

Next up for Weevil Football will be Great American Conference foe Southwestern Oklahoma State, on Saturday, Sept. 10, in Monticello, Arkansas for the Weevil’s 2016 home opener with kick-off scheduled for 6:00 p.m.