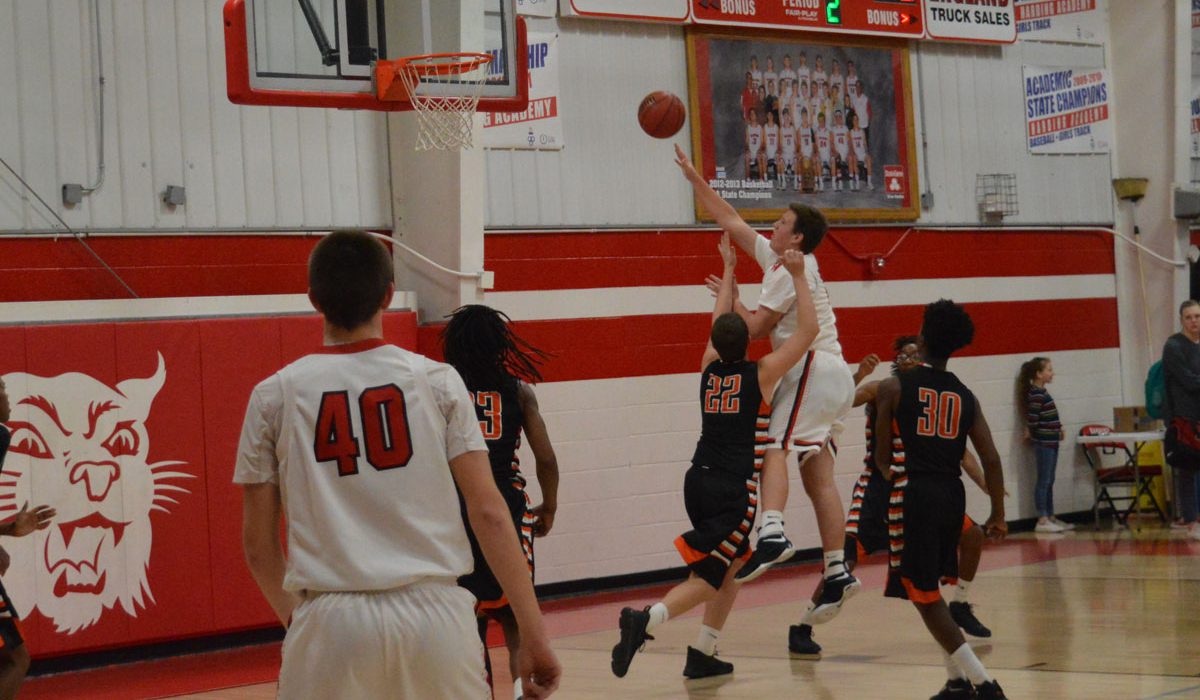 SEARCY – The Harding Academy Wildcats defeated the Newport Greyhounds, 66-29, on Jan. 31 at the Harris Gym.

Matt Francis led the Wildcats with 17, connecting on five triples. Larell Hardiman led the Greyhounds with 15.

The win improved the Wildcats to 12-3 in conference, 16-7 overall. The loss kept the Greyhounds winless in conference, dropping them to 0-14, 1-18 overall.

The Wildcats came out determined after dropping back-to-back conference games to Mountain View and Tuckerman. The Wildcats lost their leading scorer, Brady Palmer, after he suffered a broken wrist in the matchup with Mountain View on Jan. 27. Palmer suffered the injury in the third quarter, but returned and scored 11 in the fourth.

Wildcats Coach Brad Francis said the team had to move on and focus on the remaining games.

“Nothing really changes,” Francis said. “Those games are over. This is the most important game in front of us tonight so we had to go back to what we do.”

The Wildcats were on cruise control all night. They only trailed once, and that was when it was 4-3 Greyhounds early in the first quarter. They scored 27 points off three pointers, just two points less than the Greyhounds final score.

The Wildcats took a 58-23 lead into the fourth. The quarter was relatively quiet, as neither team scored over 10. Even though there was little action, the greatest play of the game came in the fourth after Caden Burks scored his first points of his high school career.

Burks misfired on two threes earlier in the quarter and was still in search for his first bucket until his teammate found him wide open under the basket. Burks caught the pass and laid it up on the left side of the basket and the crowd cheered like he had just hit the game winner. The bucket came with 1:05 remaining and was the last make of the game.

The Wildcats were in full control coming out of halftime. Francis hit three of his five threes in the third, outscoring the Greyhounds himself 9-8. The Wildcats reached the 50 mark after Jordan Ashmore connected on a corner three that drew praise from the Wildcats student section.

Francis followed Ashmore’s three with back-to-back triples of his own, extending the Wildcats lead to 56-18 with a little over a minute remaining. Hardiman led the Greyhounds on a 5-0 run, converting an and-1 and post jumper to make it 56-23 with 12 seconds remaining. The Wildcats closed the quarter on a buzzer beater as Kage Citty had an easy layup to make it 58-23.

The Greyhounds entered the second quarter trailing 14-4. Things seemed to be looking up after they converted on their first possession to make it an eight-point game, but Citty sparked the Wildcats offense and helped them take off in the second.

Citty had seven in the quarter, including an impressive and-1 wrap around layup to give the Wildcats a 20-9 lead with six minutes left. Francis connected on back-to-back threes to extend the Wildcats lead to 28-12 with 3:06 remaining and they closed the quarter on a 9-3 run.

Both teams are in action on Feb. 3 as the Wildcats visit the Riverside Raiders and the Greyhounds host the Heber Springs Panthers.