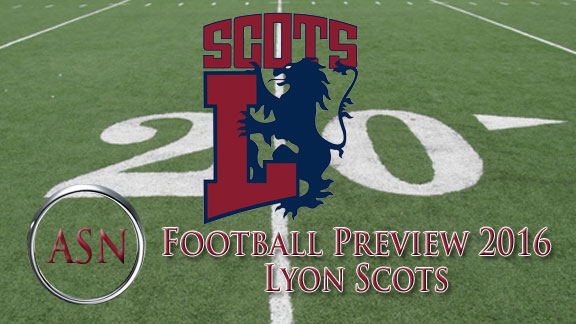 For the first season of varsity football at Lyon since 1951, a winless year may have been expected by some. The Scots came excruciatingly close twice in October – a loss in overtime and a loss as time expired in regulation – but still finished the opening campaign in the revival of the program without a win. But that year is done and in the books and the experience has been gained for a young team ready for Year Two.

Coming into camp, there will be competition for the starting role at the quarterback position with Dwane Robinson the lone returning with significant experience from last year. The headliner of the team in 2015 was Michael Bowles, who will be the featured running back for the Scots again. Bowles was third in the country last year with 1,431 rushing yards and had eight rushing TDs. Robinson and Bowles are the only two returnees that recorded at least 10 receptions last year, while tight end Jonathan Hendrix was a first All-CSFL performer in the run-oriented offense.

Del Howard has been promoted to defensive coordinator as adjustments have been made to the defense which gave up 46.9 ppg in 2015. As a whole, the defense will still be a young group, but the defensive line had a solid spring. There will likely be new faces emerging in the linebacking corps again this season. But the Scots already have a strong secondary, led by first team All-CSFL safety Stephen Benedik, who led the team in tackles with 89.

The Scots didn’t have to look too far to find a solid kicker in Osvaldo Espericueta, a sophomore from Batesville. Espericueta was 6-for-12 in field goal attempts with a long of 47 and made 23 of 24 PATs. The versatile Dwane Robinson made honorable mention all-conference as a kickoff returner.

More than 50 Lyon players return for the sophomore season for the Scots and almost of them are sophomores. With many more recruits and much-needed experience earned in 2015, the Scots head into this year with much possibility ahead. With another strong year from Bowles and favorable bounce of the ball here or there, this team could pick up some close wins and surprise a few other teams.