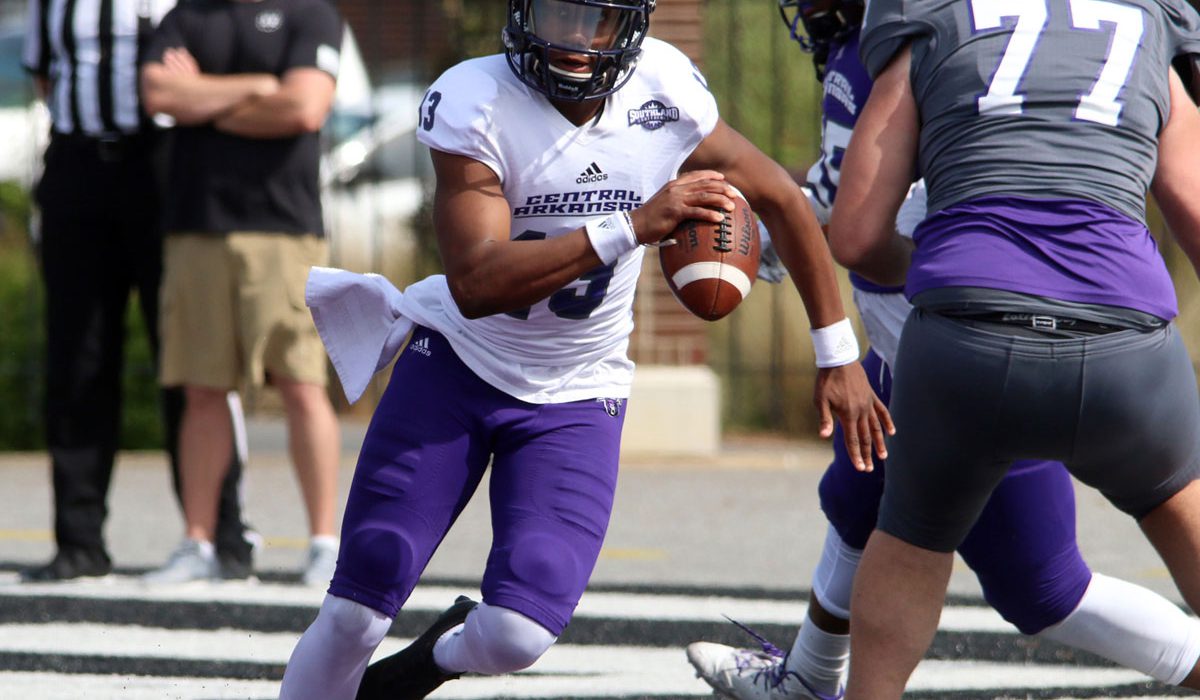 The Bears closed spring practice with the Purple squad, mainly the first-team offense and defense, outscoring the Gray 33-13.

“We had a good spring, I was pleased,’ said Campbell, who led the Bears to a 10-3 record last season and a second-round appearance in the FCS Playoffs. “Now we have to get back in the weight room. I’m telling these guys, it’s all about how you finish. Today’s scrimmage, there were some spots that I really didn’t like. But the (No.) 1 O (offense) finished with three touchdowns in a row. They finished. Now it’s about finishing in the weight room these last two weeks, finishing in the class room. Now it’s all in how you finish.’

Sophomore running back Carlos Blackmon, UCA’s top rusher with 616 yards last fall as a true freshman, had a pair of rushing touchdowns from 25 and 4 yards out, while redshirt freshman running back Kierre Crosley from Everman, Texas, broke off a 67-yard touchdown run late in the game.

“We made some big plays through the air and on the ground,’ said Campbell. “But we put the ball on the ground, and I’m not happy with the turnovers or the penalties. Those are things that will cost us. In the first half, the 1s (offense) had four drives and we scored on two of them and penalties killed on the other two. But then in the second half, they scored on the last three drives. So there was enough good things to build off, but there are some things that will definitely get out attention.

Campbell singled out Hampton, Smith and Crossley, among others, on the offensive side of the ball.

“This was kind of our third and a half scrimmage, three scrimmages and a half scrimmage, and Joe Hampton has made big plays, multiple big plays, in two of them,’ said Campbell. “He’s shown that he can do some things. I thought (senior receiver Brandon) Cox made another couple a plays. And to me, Breylin really stepped up. I’m pleased with his progress. He’s shown that he’s going to be a really good quarterback.

“I thought Breylin kind of took another step today. I need to watch the film, but he took that (No. 2) bunch down and scored against at least pieces of the No. 1 defense a couple of times. And that’s a pretty good little defense over there, even with some missing parts. I was very pleased with Breylin. He has shown what we have known, that he’s going to be a good player. He’s not afraid to make a play. He’s got the personality, he brings a little juice and fire.’

Campbell was also happy to see a big-play threat at running back in Crossley.

“With Kierre Crossley, we hit a home run. I said we needed a home run hitter and he hit a home run,’ he said. “He took it 70. This is my fourth year (at UCA) and the fourth spring, and that’s the first 70-yard touchdown run we’ve had since I’ve been here. We’ve been wanting a home run hitter, and we finally had somebody take one out of the park from 70 yards. We just haven’t done that, in a scrimmage or a game.’

“Defensively, Chris Terrell is a really good football player,’ said Campbell. “(Senior) Tre (Smith) held down that one corner… you don’t even like to throw it over there at Tre a whole lot. And Kirk (Baugh) made some tackles. He showed up on defense. He was the defensive player of the year out of high school and he did well today. He’s adjusted well over there.’

UCA opens the 2017 season at Big 12 Kansas State on Sept. 2 in Manhattan, Kan. The first home game for the Bears is the SLC opener against Southeastern Louisiana on Sept. 16.