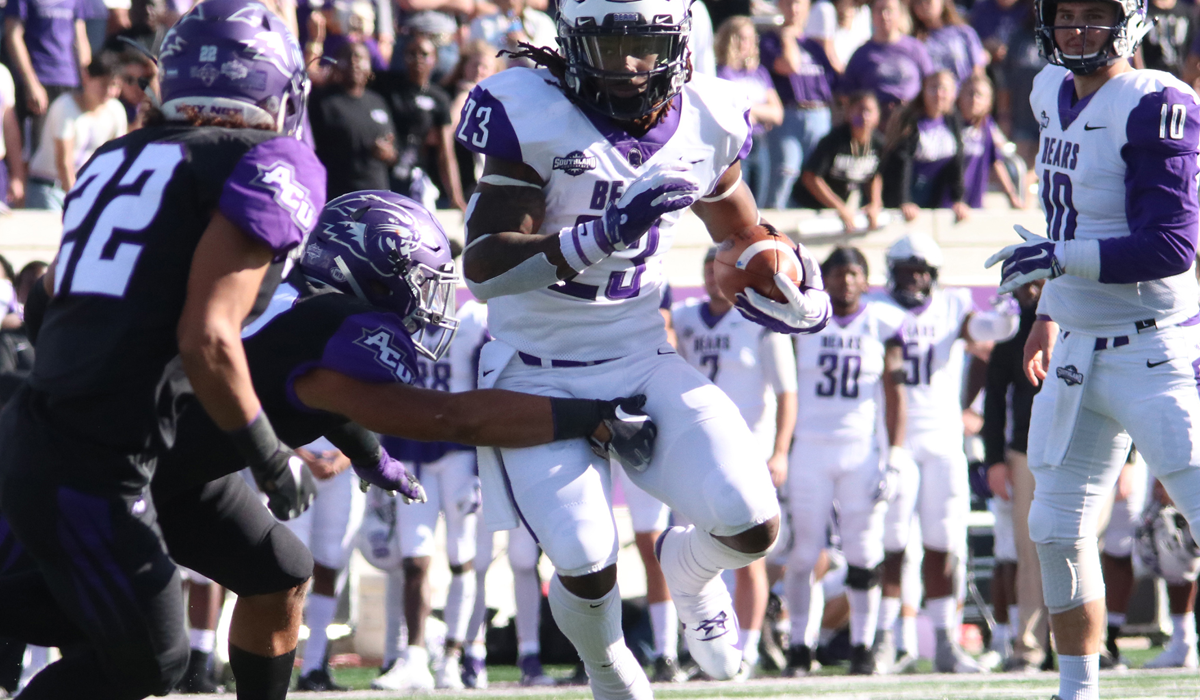 ABILENE, Texas – It wasn’t a thing of beauty but the result was pretty darn good looking to the University of Central Arkansas Bears on the final Saturday afternoon of the 2018 season.
A hard-fought 16-7 Southland Conference road victory over the Abilene Christian Wildcats secured a winning season for the Bears (6-5) in head coach Nathan Brown’s debut season. The UCA defense dominated on a defensive kind of day at a windy Wildcat Stadium, allowing just 73 yards and zero points in the second half. A late interception by sophomore Robert Rochell _ his second of the day _ sealed the victory and sent 17 UCA seniors out on a winning note in their final game.
The victory was also UCA’s 100th since moving to the NCAA FCS level in 2006.
“I’ve been saying all along, we really do have a good team,’ said Brown, who took over the UCA program after four years as offensive coordinator. “Our guys fought their hearts out to win a game like this. You saw a team playing for UCA pride. And I said it all week, those teams that play like that are scary.’
The Bears, after falling behind 7-3 with 13:06 left in the second quarter, dominated on the defensive side. ACU’s final 10 possessions of the game produced eight punts, a fumble and an interception.
UCA trailed until the 5:48 mark of the third quarter when senior Matt Cummins connected on his third field goal of the day, a 42-yarder, good for a 9-7 UCA lead.  Needing a big play or two to run time off the clock, UCA got a 21-yard pass to sophomore tight end Jack Short, down to the ACU 18 with under 5:00 minutes remaining. Three consecutive runs by junior running back Carlos Blackman moved it to the 2 before Hales found Short with touchdown pass in the right corner of the end zone that survived an official’s review and gave UCA the cushion (16-7) it needed.
The Bears’ defense did the rest, stopping the Wildcats at midfield with Rochell’s second pick of the day and team-high fourth of the season to seal it.
“I thought we played a pretty complete game, no turnovers on offense and we turned them over,’ said Brown. “And good things happened for us.’
The first half – including a scoreless first quarter – was a combination of defense, punts and field goals. UCA struck first with a 20-yarder field goal by Cummins with 14:11 left in the second quarter. ACU answered with its only scoring drive of the day, capped by a 36-yard touchdown pass from Luke Anthony to D.J. Fuller, good for a 7-3 lead with 13:06 left in the half.
Cummins, a senior from Conway, connected again from 37 yards to get the Bears within 7-6 at halftime. UCA had just 119 yards of total offense in the opening half, but ACU was not much better with 158 total and just 11 rushing yards on 14 attempts. The Bears eventually finished with 292 total yards on 79 plays, compared to just 231 on 55 plays for the Wildcats. UCA dominated the time of possession, 37:36 to 22:24. UCA controlled the ball for 20:37 in the decisive second half.
“Our defense was outstanding and gave us that opportunity to punch it in there at the end and that was huge,” Brown said.
Blackman led all rushers with 85 yards on 13 carries (6.5 per carry), while Hales completed 23 of 41 passes for 183 yards and a touchdown. Seniors Jakari Dillard and Cedric Battle led UCA receivers with five receptions each, while Short caught a career-high four passes, including the final touchdown, the second of his career.
Jackie Harvell, a sophomore safety, led UCA’s solid defensive effort with seven tackles, two for lost yards and a sack and forced fumble. Joe Hampton and Jaylin Small both recovered muffed punts by ACU, while junior linebacker Roy Sutton and senior tackle Eric Jackaon recorded UCA’s other two sacks. UCA junior punter Taylor Wallace was a key factor all afternoon, averaging 44.3 yards on seven punts, with a long of 56 yards and four inside the 20 yard line.
UCA finishes the year 6-5 overall and 5-4 in SLC play.