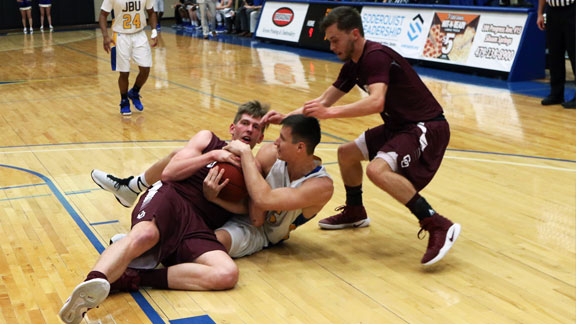 SILOAM SPRINGS – The John Brown University men’s basketball team held College of the Ozarks (Mo.) to just 27.3 percent from the field in the second half and forced nine turnovers en route to a 71-59 upset of the Bobcats on Thursday evening inside Bill George Arena.

The defensive pressure in the second half allowed C of O a mere 6-of-22 mark from the field over the final 20 minutes, while the Golden Eagles (5-2) earned its fourth-straight win by shooting 42.9 percent (12-of-28) in the final period, hitting 13-of-16 from the line to seal the victory.

Down by four at the half, 35-31, JBU stayed within three points through the first 2:35 of the stanza until sophomore Benjamin Smith drained a triple from the wing, three of his career-high 19 points, before hitting a second-straight trey to give the Golden Eagles its first lead of the contest.

Sophomore Josh Bowling hit a shot in the post at the 15:37 mark, extending the hosts’ lead to five, 47-42, but the teams continued to battle through the stretch never separated by more than four points. Just past the halfway point, the Bobcats’ DeMon Hyler converted a pair at the line, forcing the game’s fourth and final tie.

It wasn’t until 5:39 remaining in the game did JBU break away. Bowling started the run with a pair at the line and the lead grew to seven, 62-55, when senior Ricky Roberts hit a layup in the post from sophomore Marquis Waller. The teams traded free throws throughout the final minutes, but a final Roberts fast-break layup from Bowling pushed the margin to double-digits, 69-59. Waller sealed the matchup with two free throws with 41 seconds remaining.

“We had a lot of contributions tonight. Ben (Smith) hit a lot of big shots for us. We kept our turnovers down, and I think this was our best overall performance of the year so far. And to do it against a good team means a lot.”

Smith finished the game 7-of-12 from the field and grabbed seven boards while Roberts poured in 16 points on a 6-of-13 mark from the floor and dished out a game-best five assists.

Paschke’s 22 points came on a 5-of-16 effort, but also included a 1-of-6 mark in the second half. Kiefer Starbird added 12 points on an efficient 6-of-9 mark from the floor, while grabbing a game-best eight rebounds, helping the Bobcats (5-3) to a slim 36-35 rebounding advantage.