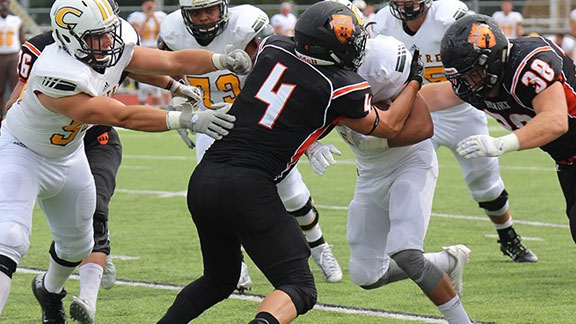 On their second drive of the game, the Warriors (5-1, 3-1 Southern Athletic Association) scored on a 30-yard pass from senior Seth Peters to senior Ethan Hoppe. The Vikings (6-1, 4-1) were limited to a 37-yard field goal by Mitchell Blanchard to make the game 7-3 at the end of the first quarter.

After a three-and-out for Hendrix, Berry started the second quarter with a 22-yard scoring run by quarterback Slade Dale to go up 10-7. The Orange & Black regained the lead with 58 seconds left in the half after a nine-yard TD run from senior running back Dayton Winn. Back-up kicker Obie Brannon kicked a 30-yard field goal as time expired in the second quarter to make the game 14-13 in the Warriors’ favor at the break.

Neither team would score in the third quarter. The Vikings opened the fourth with a nine-play drive but were forced to punt. The Warriors managed to get to the Berry 22 on the ensuing drive, but Steve Crenshaw’s 39-yard field goal was blocked by Matt Farinella. Berry took advantage and drove the ball 69 yards on 13 plays, capped by a Jacob Collins three-yard run. Dale completed a 2-point conversion to Trey Ciresi to give Berry a 21-14 lead with 4:11 remaining.

Hendrix turned the ball over on downs and the Vikings went up by 10 points on Brannon’s 38 yard field goal with 1:56 left. The Warriors went 13 plays down to the Berry 11 before Peters threw an interception in the endzone with 0.9 seconds on the clock.

Berry Notes
– Dale rushed 18 times for 137 yards and a touchdown and was 18-of-32 for 144 yards passing.
– Ciresi had seven catches for 71 yards.
– Austin Lowe carried the ball 16 times with 87 yards.
– Jonathan Fisher recorded seven tackles.
– Jackson Putnam had six tackles, an interception and two pass breakups.
– Mamadou Soumaho recorded two sacks and another for a loss.

Up Next
Hendrix will play another conference game at home next Saturday against the University of Chicago.